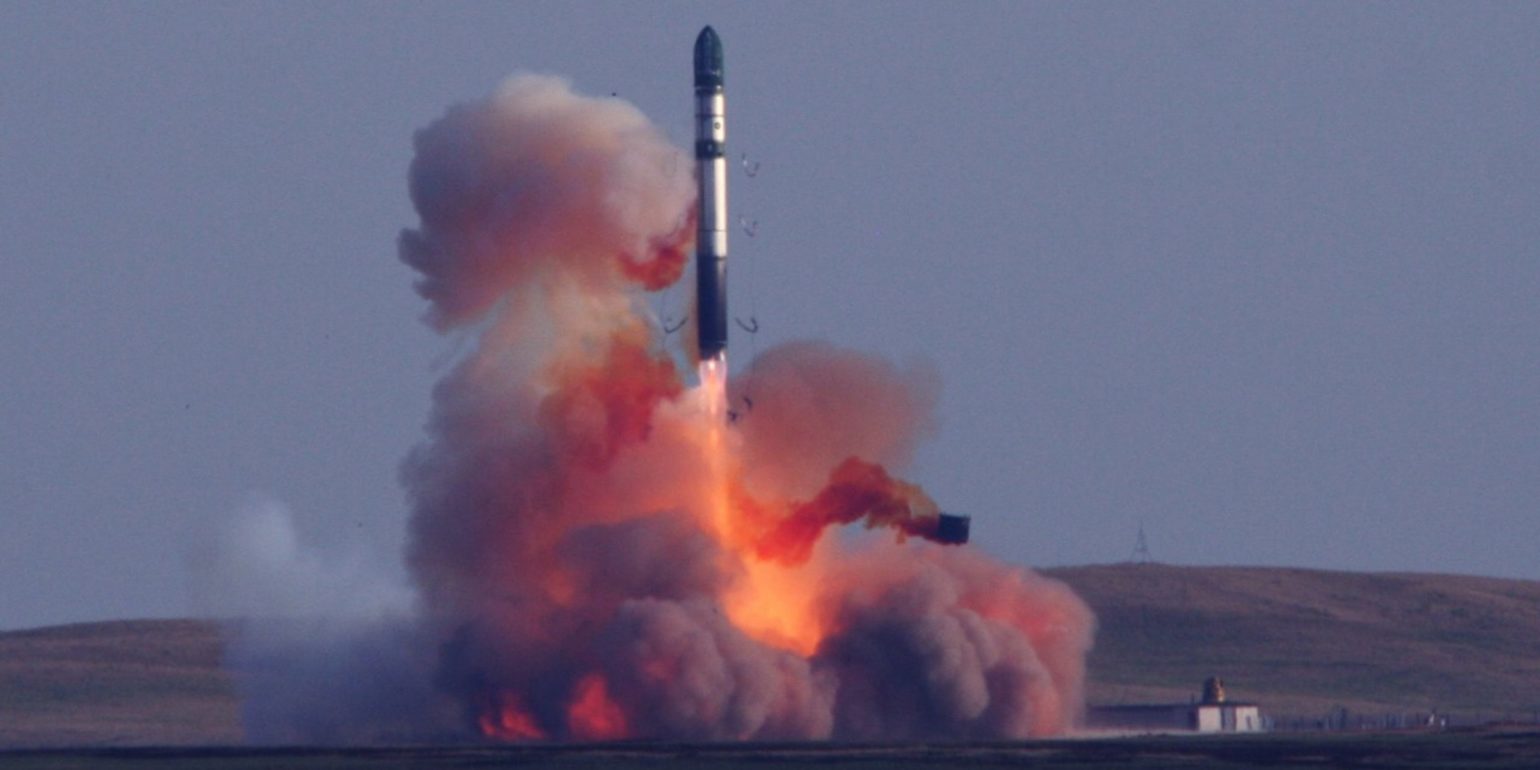 The R-36M2 has its roots in the R-36M, developed by the Yuzhnoye Design Bureau for the Soviet Union beginning in 1969. This weapon system was an intercontinental ballistic missile stored in hardened silos which were converted for use from previous Soviet missiles. Firing the R-36M began with a cold launch of the weapon out of its silo by a gas powered propulsion system. After the missile had been completely ejected, the main engines of the missile engaged. The R-36M utilized a two-stage propulsion system that garnered it a maximum range of 16,000km. The missile could be armed with either a single large warhead or a series of eight MIRVs (Multiple Independently Targetable Reentry Vehicles). It was first declared operational in 1975 and was in service until 1983, at which point it was replaced by its succeeding variant, the R-36MUTTH. [ii]

R-36MUTTH Among the technical changes found in the R-36MUTTH, arguably the most important concerned advancements made in the missile’s targeting system, which increased its accuracy. This progress allowed the Soviet Union to arm the R-36MUTTH with 10 MIRVs, each of a lower yield, without sacrificing tactical efficacy (whereas the previously warheads consisted of a larger yield, which served as insurance should the missile not score a direct hit).[iii] This missile was fully operational in 1980.

R-36M2 Although it is known that the Soviet Union developed the R-36M2 from the R-36MUTTH, the degree to which the R-36M2 has replaced its predecessor is unknown. Some sources cite the R-36MUTTH as remaining in service while others believe this is not the case. The R-36M2 continued a number of the trends showcased in the R-36MUTTH as it pertained to the overall performance of the missile.

The R-36M family of missiles are classified as “heavies” as they are extremely large and capable missiles. As is discussed in the Strategic Implications section, these missiles have garnered the Soviet Union/Russia the ability to establish a formidable strategic nuclear deterrent. Throughout much of the late 20th century, the R-36M and its variants have been at the center of arms control talks between the USSR and United States; talks which ultimately capped the total number of R-36Ms constructed and deployed.[iv]

Range, MIRVs, Penetration Capability The 11,000km-16,000km range with which the R-36M2 operates allows the weapon system to serve as Russia’s primary option for strikes against distant targets, namely those in North America and Western Europe. This extended range, coupled with the R-36M2’s ability to be armed with 10 MIRVs and an unconfirmed number of penetration aids (countermeasures to anti-ballistic missile systems), has caused concern among western strategists who fear this missile could represent a Russian first strike capability. The degree to which this missile is deemed a credible threat by the West has been confirmed numerous times by the weapon system’s centrality in arms control talks in past decades.

Cold Launch Capability Unlike its American counterpart, the Minuteman III, the R-36M2 is a cold-launched weapon system. This ability, as outlined above, allows for the missile to be fired without severely damaging the silo in which it used to be housed. Western strategists have feared that this innovation could allow the Russians to hypothetically “reload” missile silos in the event of a nuclear exchange. Since American missiles are “hot launched,” corresponding missiles silos are left unusable after launch. This difference in technology could prove to be a decisive advantage in the case of an extended nuclear exchange between Russia and the United States.[v]

1991: START I is signed by the US and USSR, limiting the number of deployable warheads and delivery systems.