The United Kingdom is one of the nine countries possessing nuclear weapons. It is a very stable partner and supporter of U.S. security and is a permanent member of the United Nations Security Council. Britain is a member of the Five Eyes intelligence sharing alliance with the US.

In 2003, the Framework Memorandum of Understanding on Ballistic Missile Defense was signed between the governments of the U.S. and the U.K. and established patterns of cooperation on missile defense issues, especially on the field of research and development.[i] Also in that year, the United Kingdom formed its version of the Missile Defense Agency, named the Missile Defense Centre.

The country hosts an Upgraded Early Warning Radar (UEWR) in Fylingdales, for missile warning and space surveillance missions. In February of 2013, the British military allowed the United States to perform system (software and hardware) updates, without changes to the physical façade of the defense system, on the UEWR. Since 2007, the U.K. government has allowed the U.S. to use the satellite communication facilities at RAF Menwith Hill station to route data to the U.S. missile defense system. 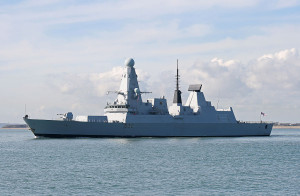 A Type 45 destroyer employed by the United Kingdom

The UK has effective theater-wide anti-ship missile defense capabilities because of its Type 45 destroyers, which are used to shield the British fleet from aerial attacks. Currently, the UK has deployed six total Type 45 destroyers.[ii] The anti-ship missile defense components of the Type 45 consist of the Sea Viper missile defense system, Sampson multi-functional radar, and the radar-controlled Phalanx Gatling gun, the latter serving as the last line of defense against incoming air and missile threats. The Sea Viper serves as the primary anti-ship missile defense tool for the Type 45 and provides all around protection against aerial threats up to 70 miles away. Interceptor missiles employed by the Sea Viper missile defense system are the Aster 15 and the Aster 30 that have ranges up to 20 and 75 miles respectively. The interceptor missiles are fired from Sylver missile-launching systems aboard the destroyer and work in tandem with the on-board Sampson radar, the Combat Management System, and long-range radar to identify, track, and intercept incoming aerial threats.

Cooperation continues between the U.S. and the U.K. on advanced technology programs or system-level analysis.  Together with its American partner, it has created the European Phased Adaptive Approach, which is built on the principle that the U.K. will integrate its sensor systems with U.S.-based ships and missile technology in and around Europe, specifically with regards to both Navies.[iii]

In late 2016, government officials from Britain and France agreed to cooperate further on missile defense development, by implementing the Cross-Channel Centres of Excellence Strategy. This will establish specialized missile centers in hopes of improving defense innovation for both countries.[iv]

Japan and the United Kingdom announced, in November 2017, that their joint program to undertake research and development of a new air-to-air missile will transition to a prototype state in 2018.[v]

In December 2017, the United Kingdom announced its intent to deploy Israel’s Iron Dome system in the Falkland Islands as an added layer of protection.[vi]