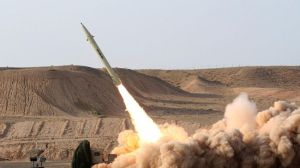 The Meshkat is a indigenous Iranian cruise missile development program. According to officials from Iran’s Defense Ministry’s Aerospace Organization, the cruise missile will have a range of 2,000 km, and have air/submarine/ground launch capabilities. [1]

If the Meshkat became operational with the capabilities purported by Iranian officials, it would be one of the longest ranged warhead delivery vehicles in the Iranian arsenal. Matched in range only by Iran’s Shahab 3 and Sejjil medium ranged ballistic missiles, Meshkat would be able to reach targets as far as Israel, Southeastern Europe, and Northern India.

As of May 2018, the Iranian military has not yet successfully tested a Meshkat missile.