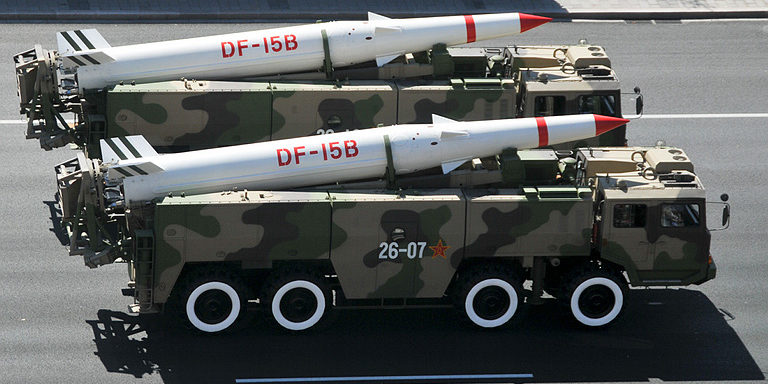 Unveiled for the first time at the Beijing Defense Exposition in 1988, the DF-15 was developed in the late 1980’s and deemed operational in 1989. The single-stage, solid-fueled, SRBM is the first creation in the DF-15 family by the People’s Republic of China. With a range of 600-800km, the missile uses an inertial-based guidance system and has a CEP of 50-100m. Fired from the Transporter Erector Launcher, the DF-15 SRBM requires 30 minutes for launch preparation.[v] The DF-15 has been upgraded several times into more powerful variants like the DF-15A, DF-15B, and DF-15C. China is believed to manufacture between 30-50 DF-15s a year and as of 2010, the PRC possessed approximately 350-400 operational DF-15 SRBMs.[vi]

The DF-15A variant is fitted with a new missile focused on improving accuracy and range which became operational in 1996. The missile is slightly larger than the original DF-15 and has a range of 900km as well as a 100m CEP.[vii]

The DF-15B is an upgraded version of the DF-15A that significantly increased the missiles accuracy. The DF-15B also introduced a new TEL launcher. Revealed for the first time during a 2009 military parade in Beijing, this SRBM features superior GPS and terminal guidance systems and possesses an active radar seeker and laser rangefinder.[viii] The DF15-B has a range up to 800km, a 35-50 CEP, and a single 500kg conventional warhead.[ix]

The DF-15C, or Bunker Buster, was designed to strike underground facilities by hosting a deep-penetration warhead and is identified by its extended cylindrical nosecone.[x] The DF-14B and DF-15C are both two-stage modifications from their former variants however the DF-15C is specifically intended to attack hardened underground bunkers.[xi] Like most of the DF-15 family, the DF-15C is deployed in a vertical position by using TAS5450 or WS-2400 TEL launchers. As of 2017, the DF-15C has yet to be deemed operational.[xii]

The DF-15 family offers a variety of strategic implications for the People’s Republic of China. Tested heavily during the 1995/1996 Taiwan Strait Missile Crisis, it is apparent that the DF-15 missiles are often used as a deterrent from Taiwan seeking independence.[xiii] This is further noticeable by the DF-15C which is designed to attack underground military targets such as hardened military facilities located in Taiwan. According to one estimate by the RAND Corporation, the PRC’s DF-15 stockpile alone is nearly double the size needed to eliminate Taiwan’s attack aircraft infrastructure.[xiv] The extended range on the DF-15A allows China to expand their strike range beyond Taiwan, reaching as far as South Korea and parts of northern India.[xv] If relocated elsewhere along the PRC’s border, the DF-15B variant is capable of reaching Kadena Air Base, Japan to the east,[xvi] and New Delhi, India to the southwest.[xvii] Thus, the DF-15 remains a versatile component of the PRC’s rapid attack and anti-access/area denial capabilities.

[iv] Office of the Secretary of Defense, Military and Security Developments Involving the

[vi] Office of the Secretary of Defense, Military and Security Developments Involving the People’s Republic of China.