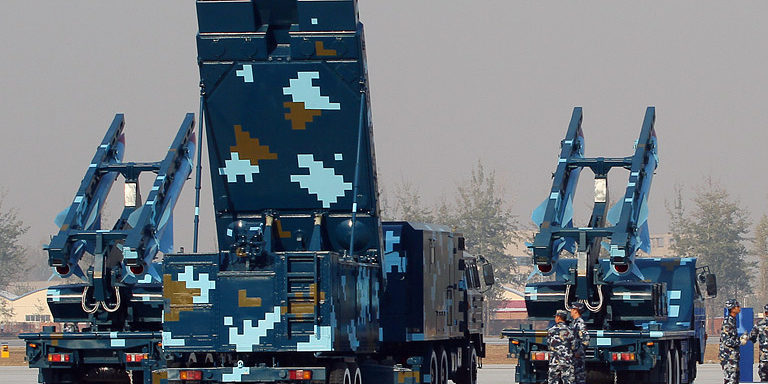 The KaiShan-1 (also known as the Hong Qi-12) is the first Chinese aerial defense system to feature a phased-array radar, with each variant having a further range than the last.[i]A typical HQ-12 battery includes one planar passive phased-array radar (PPAR), four launchers preloaded with two missiles each, and 16 additional missiles, along with command-and-control and generator units.[ii]The PLA claims HQ-12 has a single-shot kill probability of 89 percent.[iii]

Differences between the variants are due primarily to different radar units: KS-1 typically uses SJ-212 engagement radar, derived from the Russian 30N6E1 Tomb Stone, which can track up to 50 targets and engage three of them at ranges up to 27 kilometers.[iv]KS-1A has used two types of engagement radar; the original HT-233 radar has a range of 50 kilometers, and the newer H-200 radar has a range of 70 kilometers and can track up to 100 targets.[v]Along with using the H-200 radar, KS-1C fires individually-launched, cannister-encased missile rounds instead of paired, rail-mounted missiles; this effectively doubles the number of potential interceptors available in each battery.[vi]

In 2016, China unveiled the advanced HQ-22 and its identical export designation, FK-3. HQ-22 is a second-generation variant of the HQ-12, which features a medium-long engagement range of 150 to 170 km.[vii]HQ-22 can reportedly destroy U.S. third-generation aircraft.[viii]It is roughly equivalent to the MIM-23 Hawk, the precursor to the American Patriot system.

The HQ-12 was primarily designed to destroy UAVs and helicopters, but its more advanced variants are also capable of destroying ballistic and cruise missiles flying at speeds exceeding Mach 3.[ix]While the original HQ-12 system is largely obsolete, the KS-1A and KS-1C offer reliable protection for Chinese military assets and coastal cities. Moreover, PLA’s developments of the HQ-22 and FK-3 should trouble the United States. The real danger lies in FK-3’s export potential, as the extended-range engagement radar and high kill probability could render U.S. allies’ third-generation aircraft inoperable in Central and Southeast Asia in the event of a conflict.

September 2016: Thailand signs a memorandum of understanding to buy KS-1A from China.

July 2015: Myanmar receives the first batch of the KS-1A systems from China.[xii]

2005: Malaysia signs a memorandum of understanding to buy KS-1A from China.

1989: An HQ-12 prototype is successfully test-fired for the first time.[xv]