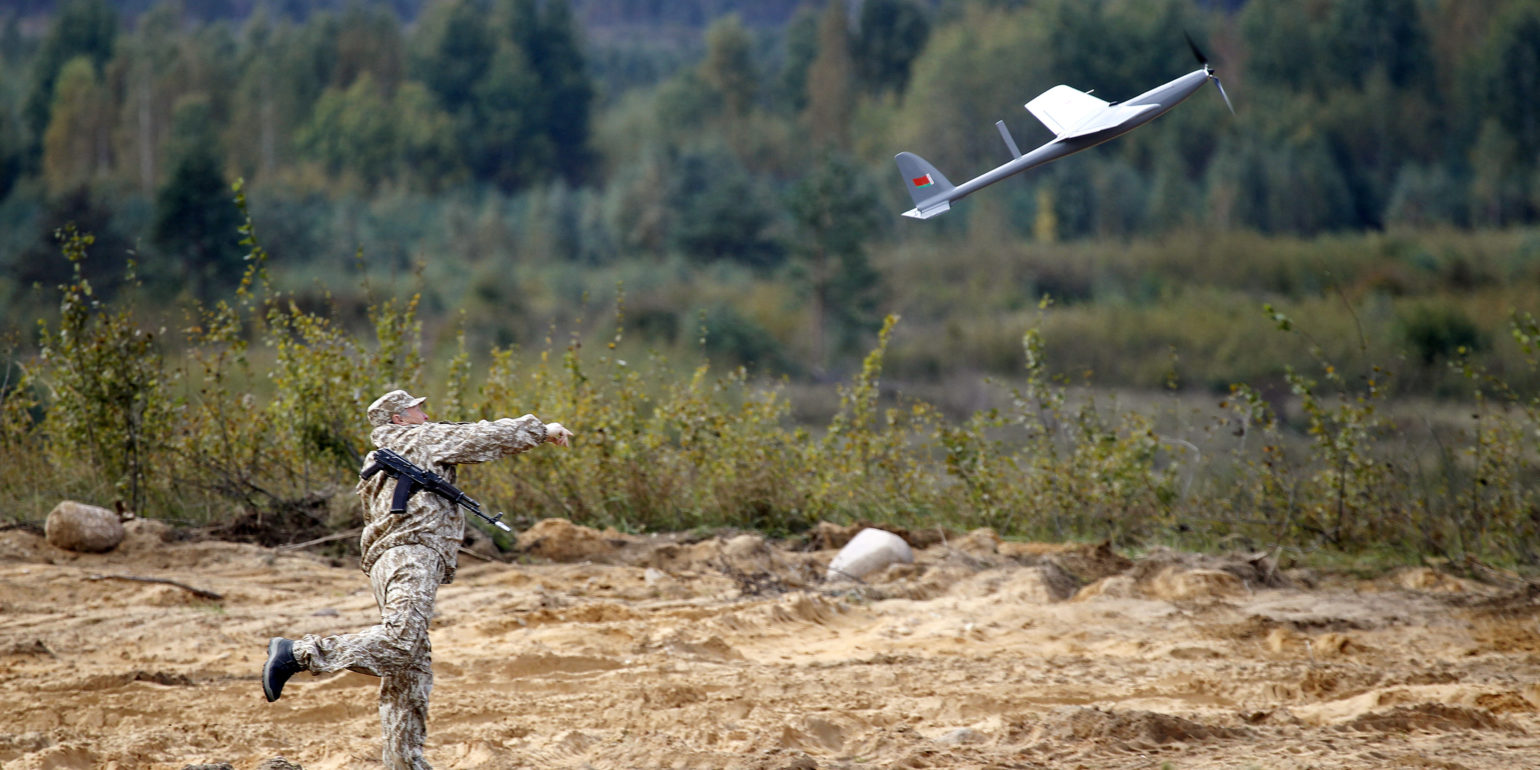 What is the threat?

Unmanned Aircraft Systems (UAS) pose unique strategic challenges that are relatively new to military planners. Diverse UAS models have proliferated across the globe over the past decade while the technology has improved, allowing greater use of UAS systems both in a military capacity, but also the private sector. There are over 600 different types of UAS with over 700,000 individual UAS being sold just in the United States in the year 2016. Currently, U.S. capabilities against UAS systems is lacking with currently deployed air and missile defense systems only being effective against large drones, and currently, no defensive systems are deployed (to an adequate extent) that are capable of effectively countering smaller UAS.

UAS are classified by their size, range, and speed, and are broken into five groups based on those attributes. The varying sizes and ranges of different UAS models provide unique advantages and disadvantages to each group. Groups 1-3 are smaller UAS models which tend to have shorter ranges but often provide a greater challenge than their larger counterparts  Groups 1-3 also are significantly more likely to be used by non-state actors due to their low-cost and widespread availability. Groups 4-5 are much larger, can travel at greater distances, and are often significantly more expensive. Due to their size and price, groups 4-5 are often only used by states and are less prevalent than smaller sized drones.[2] UAS can also be classified by the way they are controlled and include autonomous weapons systems, which can operate and complete objectives without any direct human interaction.

Groups 1-3 are considered to be the greatest threat to military forces across the globe due to their unique range of capabilities as well as their relatively low cost and small size. Groups 1-3 can range from over-the-counter handheld drones to medium sized drones with sensors and the capacity to deliver weaponized payloads.[3] However, the main threat that comes from groups 1-3 is intelligence, surveillance, and reconnaissance (ISR). These smaller systems are suited to conduct tactical and operational level ISR missions, as well as have a 100lbs payload for potential ordinance. These UAS can be used for target acquisition in a combat scenario to support artillery strikes or troop maneuvers and can be launched from forward operating positions, without the use of conventional runways. This places American warfighters at a disadvantage against an (state or non-state) enemy force with modern targeting capabilities and the use of UAS groups 1-3.[4] UAS groups 1-3 are difficult to detect and destroy due to their low flying altitude and small size, and American ground forces are presently deployed without defensive systems designed for defeating such small, inexpensive, and potentially numerous targets.

Groups 4-5 are less widespread but easier to counter because they tend to operate at speeds and altitudes similar to that of manned aircraft; aircraft which U.S. forces are trained to identify and defeat with currently-deployed air defense systems. These UAS also commonly require runways and are similar in size to manned aircraft.[5] Groups 4-5 are susceptible to anti-aircraft weapons and other aircraft however they are also capable of carrying much larger payloads and travelling much greater distances than the smaller groups of UAS. Drones commonly operated by the U.S. military such as the MQ-1A/B Predator and MQ-9 Reaper fall under groups 4-5. 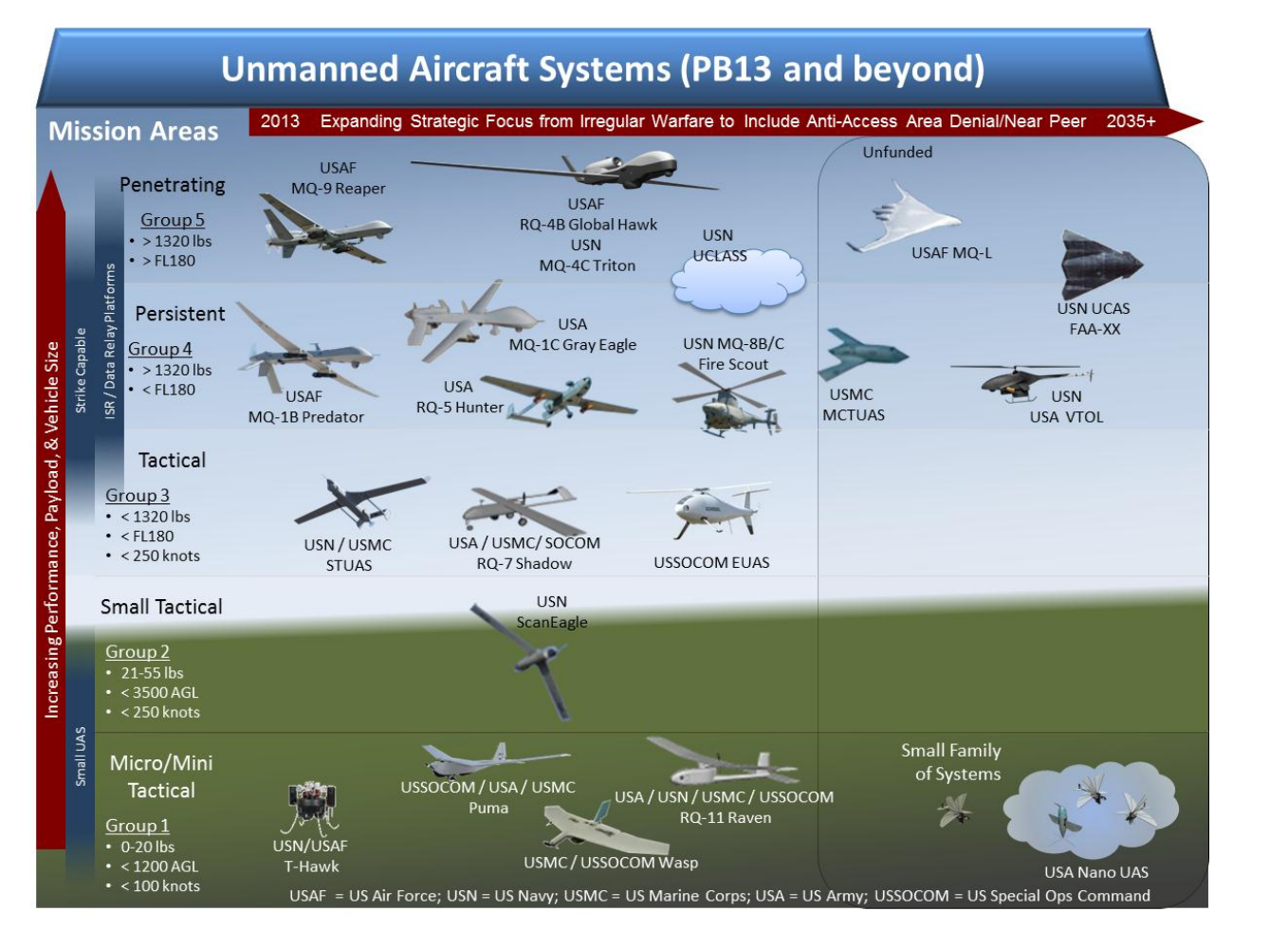 In the future, better UAS technology and the miniaturization of drone components will lead to stronger, more capable drone technology which will create an even greater threat. The proliferation in the use of UAS in the private sector as well as by governments will clog airspace and create target identification issues. Threats such as increasingly small drones with ever-more-powerful payloads and drone swarms pose a threat to states, soldiers, civilians, and infrastructure around the world if they are not properly understood and countered.[6] To counter this emerging threat, The United States and the rest of the world must come to better understand the role that drones will play in the future and the unique threat they can pose.

What is our current capability in regards to the threat?

Current counter-UAS (C-UAS) systems are behind the curve when it comes to the growing and diversified capabilities of UAS. The United States has operated UAS effectively in Iraq and Afghanistan, but only recently has UAS proliferation forced the U.S. military to consider greater protection against such threats.[7] Currently, the United States is heavily dependent on anti-aircraft and missile intercept systems, such as Patriot (PAC-2), to carry out UAS intercepts.[8] UAS threats are small and inexpensive, and the use of advanced air and missile defense systems against such a threat is “overkill” and a terrible economic exchange. For example, a $3 million-dollar Patriot missile is currently the only U.S. weapon system readily available to down a $200 drone; one most likely available on Amazon or Ebay.[9] The current U.S.  C-UAS capacity is unsustainable, especially as drones continue to proliferate and improve. If Patriot were the primary means of C-UAS for U.S. forces, a squadron of drones costing no more than a few thousand dollars could entirely deplete a Patriot battery’s capacity, making that area vulnerable to more serious strikes.

U.S. forces are particularly vulnerable to emerging UAS threats in Europe. Russia has made great use of UAS in Crimea, and has hacked and intercepted U.S. drones flying in Crimean airspace.[10] One solution to the scarcity of NATO C-UAS capability is the AN/TWQ-1 Avenger, a HMMWV-mounted air defense missile system that is smaller, cheaper, and more mobile than the Patriot. The AIM-9X Block II missile, launched from an Avenger vehicle, is an effective and more cost-efficient defense against UAS, relying on a passive IR seeker to find small drone-like targets.[11] This system, operated by a gunner located in between the two firing pods, was used successfully in Iraq, but is not currently deployed in Europe. The Avenger is optimal for protecting maneuvering ground units as it is housed in the HMMWV Humvee.

Another anti-air weapon system the United States has effectively deployed in Iraq and Afghanistan is the C-RAM (Counter-Rocket, Artillery, Mortar), which uses a radar-guided 20mm M61A1 Gatling gun mounted on a trailer. The system is the land-based variant of the Navy’s Phalanx system, capable of firing 4,500 rounds per minute.[12] The C-RAM fills the air with a high volume of rounds, making it optimal for C-UAS, as it can obliterate small targets without using an expensive guided missile. Two C-RAM batteries positioned perpendicularly put an enemy UAS in an unavoidable field of high velocity ammunition. Even one round hitting a Group 1-3 UAS would be sufficient to neutralize the threat.

To defeat modern and future UAS threats, a wide range of options must be available to counter the many scenarios in which drones can be employed by U.S. adversaries. One option is left-of-launch capabilities: Using cyber or electronic warfare to render enemy-UAS units useless before starting their mission. A second option is to use directed energy weapons, such as laser or microwave weapons, to bring down drones that pose a direct or indirect threat to ground forces. Lockheed Martin has shipped its 60kW Laser to the U.S. Army, which can direct 43% of the electricity used to power it on a target.[13] The system can be mounted on a light-armored vehicle such as a Stryker or a Bradley to assist ground forces. Directed energy weapons are promising, however, they are expensive to develop and the technology is still being tested. More traditional forms of anti-air weapons, resembling the C-RAM, rely on twin or revolver guns to fire either buckshot or AHEAD ammunition, providing a cost-effective means to disable UAS. Many options for weapons carried by individual soldiers are emerging, such as shoulder-fired net or jammer guns.

The U.S. Air Force recently awarded ETLA North America Inc., the U.S. subsidiary of Israeli Aerospace Industries (IAI), a $15.6 million contract for Drone Guard systems to be delivered July 18th.[14] The system employs Electric-Optical (EO) sensors to track drones, and Electronic Attack (EA) jammers as a non-kinetic approach to down any UAS flying in a protected airspace. Non-kinetic technology appears to be the international weapon-of-choice for C-UAS, as many countries are developing jamming systems which prey on the unsophisticated electronics used by cheap drones.

The first step in countering the rising threat from UAS is target acquisition and identification. Just as important as the kinetic and non-kinetic weapons of C-UAS will be the continued development of comprehensive detection systems to track the increasingly micro UAS threat. The proliferation of UAS (especially group 1-3), the downsizing of the technology, and its decreasing costs of production will make threat detection even more difficult given the increased number of drones in the air. More capable infrared or electro-optic sensors would increase a soldier’s or unmanned system’s ability to detect a hostile drone. If carried out, these systematic adjustments could enable soldiers on the ground to effectively detect, identify, and eliminate threatening UAS. The United States looks to cooperate with its allies in NATO to form a “Combined Arms Approach” and integrate allied systems to counter UAS with uniform procedures of “Detect, Identify, Defeat”.[15]