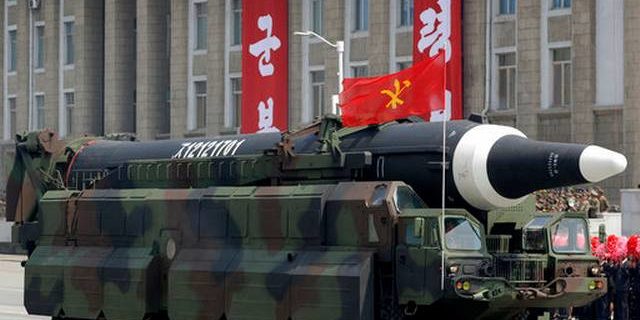 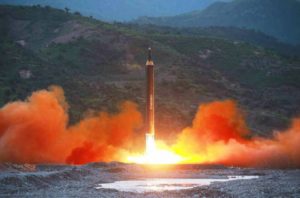 On April 15, 2017, North Korea unveiled the Hwasong-12 for the first time during a military parade celebrating the birth of North Korea’s founder, Kim Il-Sung. Less than a month later, on May 14, North Korea successfully tested the missile, firing it at a lofted trajectory to avoid affecting neighboring countries and to test the missile’s reentry vehicle.[1] During the test, the Hwasong-12 flew for around 30 minutes to an altitude of over 2,000 km before falling back to Earth, landing approximately 787 km away in the Sea of Japan.[2] Experts speculate that if the missile was fired at a standard trajectory, it could have traveled more than 4,000 km, indicating the missile is of intermediate-range.[3] According to the KCNA, North Korea’s state-run news agency, the test launch verified a homing feature of the warhead that allowed it to survive “under the worst re-entry situation” and accurately detonate.[4] North Korea also claimed the Hwasong-12 can be equipped with a “large-size heavy nuclear warhead.”

The Hwasong-12 is road-mobile and similar in design to the Musudan intermediate-range ballistic missile. However, the Hwasong-12 is without stabilizer fins and, according to expert speculation, potentially equipped with a new and more capable rocket engine; allowing the missile more accuracy and reliability than the Musudan. The engine for North Korea’s Hwasong-12 also appears to be “uniquely North Korean,” according to experts — potentially designed by North Korean engineers rather than being based on foreign components and/or blueprints. [5] Experts speculate that the Hwasong-12 has one-stage, and the missile’s nosecone closely resembles that of the KN-08, North Korea’s intercontinental ballistic missile (ICBM) prototype.[6]

Click here to watch footage from KCNA showing the test launch of the Hwasong-12 on May 14,2017.

If operational, the Hwasong-12’s 4,000 km range indicates the missile can be used to strike all of Japan or South Korea. Also within the missile’s range are U.S. military installations in South Korea, Japan, and Guam.  North Korea’s successful test of the Hwasong-12 on May 14, 2017 demonstrates marked progress on the country’s indigenous ballistic missile capabilities. The missile’s lofted trajectory during the May 14 test enabled the North Koreans to measure the Hwasong-12’s reentry vehicle capability, and given the missile’s landing in the Sea of Japan, it can be inferred that the reentry vehicle performed successfully. Moreover, experts speculate that technology used by the Hwasong-12 could be reconfigured to support North Korea’s longer range missiles, such as the KN-08 ICBM.[7] If North Korea can indigenously design and produce long-range missiles such as the Hwasong-12, Pyongyang may be only a few years away from indigenously developing an ICBM capable of reaching the United States; much sooner than previously estimated.