North Korea first displayed the KN-23 in a military parade on February 8th, 2018. The DPRK first tested the missile on May 4th, 2019 in what it described as test of a ‘tactical guided weapon’.[i] The test was conducted from Wonsan and had a range of 240 km and an apogee (maximum height on the ballistic rectory) of 60 km. On May 9th, two more KN-23 missiles were tested from Kusong.[ii] The first had a range of 420km and the second of 270 km – both of an apogee of 50 km.[iii] The KN-23 is a ballistic missile but has been designed to fly at low trajectory (quasi-ballistic) which shortens the flight time. The KN-23’s design has similarities to the Russian Iskander-M, which has a similar range, apogee, and payload.[iv] The missiles design indicates that it is dual-capable of delivering either conventional or nuclear warheads. Estimations based on the three tests suggest that the payload of the KN-23 is 500 kg[v].

On July 24th, 2019, the DPRK twice more tested the KN-23 at an even greater range than the May tests. One missile flew 690 km and the other 430 km. Both missiles had an apogee of 50 km and landed in the East Sea. The tests showed that the missile has an increased range from from what was originally proven. 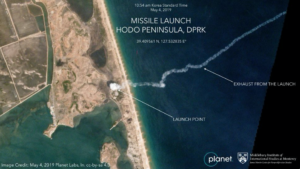 If operational, the KN-23 would be able to strike the majority of South Korean territory, even when deployed farther from the demilitarized zone.  U.S. and ROK military instillations on the peninsula are well within the missile’s range[vi]. The SRBM’s low apogee shortens the overall flight time and makes the missile harder to detect and more efficient at evading missile defense systems.[vii] The  evasive capabilities being developed may be in direct response to THAAD batteries deployed on the Korean peninsula. As a road-mobile, solid fuel platform that can be rapidly deployed and moved, the KN-23 would be a difficult target against a preemptive counter-force attack. A dual-capable KN-23 that can deliver conventional or nuclear warheads would be destabilizing in a potential crisis where threats may not be correctly attributed.

The timing of the KN-23’s tests comes during a devolving diplomatic situation on the Trump administration’s negotiations with the DPRK. This was the first North Korean missile test since November 28th, 2017 when the Hwasong-15 ICBM was fielded.[viii] The May and July tests violate UN resolutions against any ballistic missile test, but they do not contradict the DPRK’s voluntary April 2018 moratorium on intermediate-range or intercontinental-range missile tests.[ix] The KN-23 tests could be seen as the DPRK showing their resolve against the direction of the negotiations.