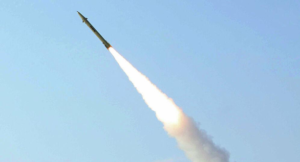 The Fateh-110 is an Iranian short range ballistic missile (SRBM) produced by Iranian-state owned Aerospace Industries Organization. The missile has been used in the Syrian Civil War by Iran and Syria, where the Syrian version is referred to as the “TISHRIN’’. In addition to its confirmed use by these two countries, it is widely reported that the Fateh-110 has been exported to Hezbollah in Lebanon [1] although never used or shown. Its concept was created after the Iran-Iraq War showcased a need for a sturdy and reliable missile for Iran.

On September 8th, 2018, Iran’s Islamic Revolutionary Guards Corps (IRGC) launched Fateh-110 missiles at the headquarters of two Iranian Kurdish opposition parties in the town of Koya, in Iraq’s semi-autonomous Kurdish region.[9] Iran used Fateh-110s in its response to the U.S. operation that killed former IRGC and Quds Force Commander Qasem Soleimani in January 2020. Reports conflicted between the number of missiles launched according to US and Iranian sources. According to former Secretary of Defense Mark Esper, the IRGC launched 16 missiles while Iran claims it launched 22 missiles at U.S. forces in Iraq in at least two locations: Ain-al-Asad airbase in Anbar Province and an air base in Erbil in central and northern Iraq, respectively.[10] Of those launched, the U.S. reported over a dozen were – Fateh Mobins with EO seekers while Iran reported that they launched 10 Fateh Mobins.[11]

Iran has also allegedly transferred Fateh-110 missiles to Syria, and by proxy of Syria to Hezbollah.[12] According to U.S. military officials, the Assad regime fired at least two Fateh-110s against Syrian rebels in July 2012.[13] U.S. military officials also noted that Syria has been using Fateh-110s as an alternative to aircraft, which are more easily shot down by Syrian rebels.[14] In November 2014, both Iranian and Lebanese sources confirmed that Hezbollah had received the Fateh-110 guided ballistic missiles and inducted the weapon into its missile arsenal.[15] In July 2020, an Israeli research center said in a report that it had identified 28 sites in the Lebanese capital of Beirut that Hezbollah is using for the launch, storage and production of missiles, in particular Fateh-110s.[16]

There are several variations of the Fateh-110 adopted for various conflicts including the Fateh 313, the Hourmouz 1 and 2, both anti-radiation missiles, as well as the Dezfull, which can reach a distance of 1000 km. The smaller diameter air launched version, the Fateh Mobin, was revealed in 2018. There is also reports of a version that has been exported and utilized by the Houthis in Yemen.

The usage of a single-stage solid propellant engine may be enhanced as Iran attempts to implement extra boosters to increase its ranger to 400 km.[17] Radar-guided and longer-range versions also derived from the Fateh-110 family were subsequently unveiled, most recently in September 2020, when the Zolfaghar Basir was claimed to have a range of 700 km.[18]

Western officials say that if Hezbollah fired these missiles from southern Lebanon, they could easily reach Tel Aviv, Israel’s second most populous city.[19] Given its proliferation and capabilities, the Fateh-110 poses a broad regional threat, holding at risk population centers near the borders of Syria, Lebanon, and Iran. Because of the practical mobility of the missile and the modification of its blueprint by other countries such as Syria, this weapon holds a unique capability in Iran’s arsenal to function as a mechanism for the country to create a vast network of A2/AD to cover large swaths of territory in its bid to secure strategic control of the Middle East. Reports from Western and Middle Eastern sources have also reported of Iran giving ballistic missiles to Shi’ite proxy militias in Iraq as part of its deterrent to US forces in the region.[20] While its arsenal buildup of weapons like the Fateh-110 are serving to combat against the Israeli-Arab coalition, most notably against Saudi Arabia and Israel, its ballistic missile program can also deter the Western presence in contested areas if actions perpetrated by regional proxies with these enhanced capabilities undermine their ability to effectively operate.