The North Atlantic Treaty Organization remains the bedrock of Denmark’s national security. It is also one of the two countries within the European Union that proposed a higher defense budget in 2010 than in 2009.  In September 2011, Deputy Assistant Secretary of the Bureau of Arms Control, Verification and Compliance, Frank A. Rose, stated that Denmark “punches above its weight class” in regards to BMD cooperation with the United States.[i] In 2004, the Danish government agreed to an upgrade to a radar in Thule, Greenland for use as a Ballistic Missile Early Warning Radar System. 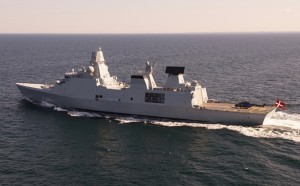 The Iver Huitfeldt-class frigate employed by the Royal Danish Navy

In August 2014, Denmark’s Foreign Minister Martin Lidegaard announced a plan to contribute at least one of Denmark’s Iver Huitfeldt frigates outfitted with a radar system to NATO’s BMD mission.[ii]

In April of 2016, the Danish Defense Acquisition and Logistics Organization contracted Terma to design an integrated air and missile defense system, or IAMD.  The system will be for at least one Iver Huitfeldt-class frigate of the Royal Danish Navy, giving it a ballistic missile defense sensor capability in line with NATO’s BMD system needs.

As of February 2017, Denmark was looking into missile defense systems to defend against Russia.[iii]

In February 2018, Denmark passed a landmark spending deal that would advance Denmark’s goal goal to raise spending on its military to 2 percent of gross domestic product ― a target set by NATO for its member states to hit by 2024. [iv]