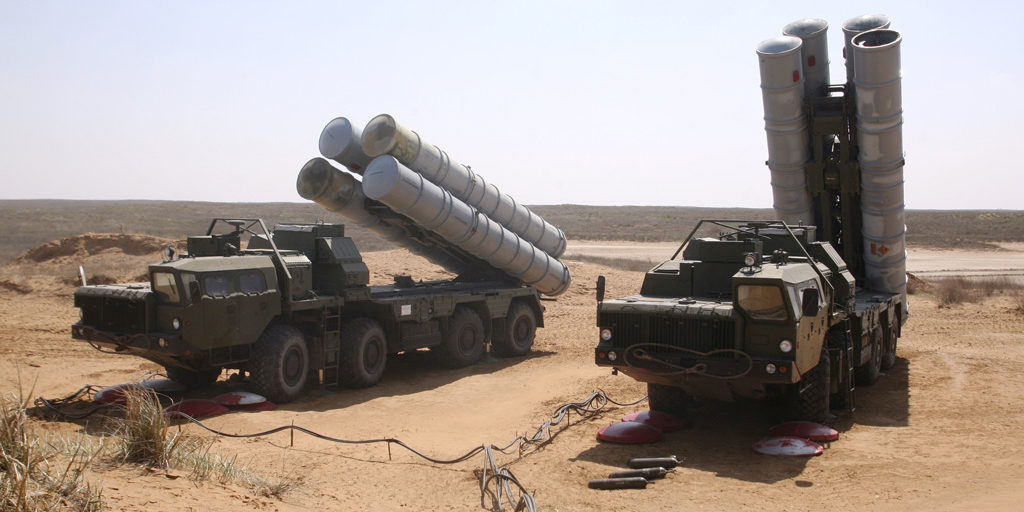 The S-300 series has evolved over time and each variant has developed different capabilities, requiring unique strategic considerations.

S-300PS (SA-10B Grumble): The oldest variant of S-300 still in service, the S-300PS is still used in Armenia, Belarus, Kazakhstan, and Ukraine. The S-300 typically consists of four 5P85S or 5P85D launchers mounted to the back of a Maz-543 truck.[ix] It can fire four 5V55K or 5V55R missiles up to 75 km, and can track one hundred targets simultaneously while engaging up to twelve.[x] The Grumble is designed to destroy low-flying aircraft, but is also capable of destroying ballistic and cruise missiles.[xi]

S-300PMU-1 (SA-20A Gargoyle): The first “deep modernization” of the S-300 series yielded the S-300PMU-1, which is designed to destroy tactical ballistic missiles. The Gargoyle boasts extended radar footprints, more efficient automation, and Anti-Ballistic Missile (ABM) capability “against ballistic missiles with re-entry speeds of up to 2.8 km/sec,” comparable to the American PAC-2 system.[xii] The ABM ability is made possible due to the 64N6E Big Bird radar, which has an aperture 30 percent wider than the U.S. AN/SPY-1 Radar.[xiii] The S-300PMU-1 has been exported to China, Cyprus, Greece, India, and Vietnam, and its 48N6 missiles have a range of 150 km.[xiv]

S-300PMU-2 (SA-20B Favorit): The Favorit is the most advanced missile defense system available for export. Its radar has a range of 300 km and it can simultaneously detect and track 100 targets and engage 36 of them while guiding 72 missiles. The Favorit can use one of two missile variants, the 48N6E2 and 9M96E2 missiles. The 48N6E2 missiles are designed to destroy theater ballistic missiles, whereas the 9M96E2 missiles can defeat more specialized targets, such as high-speed reentry vehicles at low-altitude, ballistic missiles at ranges exceeding 2,000 km, cruise missiles, anti-radiation missiles, and other precision-guided munitions.[xv] The 48N6 missile has a kill probability of 80 to 93 percent for aerial targets and 40 to 85 percent for cruise missiles.[xvi] Algeria, Azerbaijan, China, Iran, Libya, Russia, and Venezuela all possess the S-300PMU-2 system.[xvii]

The versatility of the S-300PMU-2 makes it a potent Anti-Access/Area Denial (A2/AD) tool in the Russian arsenal. Only the Lockheed Martin F-22 Raptor, F-35, and Northrop Grumman B-2 Spirit stealth bomber can operate in airspace protected by Favorit, but even the most advanced aircraft could be challenged by enough S-300 batteries acting in an integrated air defense system.[xviii] Implications for U.S. strategy are significant in multiple theaters:

First, the deployment of Favorit in Western Russia, Algeria, and Azerbaijan undermines NATO’s ability to defend and deter Russian incursions and influence in Eastern and Central Europe.[xix] The zone of Russian A2/AD expands well into NATO airspace and could severely restrict available allied flight space in the event of a conflict. The Big Bird radar’s 2,000-kilometer range could also jeopardize U.S. and NATO stealth operations across Europe.

Second, Iranian possession of S-300PMU-2 restricts U.S. options to enforce compliance regarding the Joint Comprehensive Plan of Action (JCPOA) nuclear deal, and the recent lifting of sanctions has allowed Iran to procure more advanced aircraft and anti-air defenses. Moreover, Favorit subverts American ability to deter Iran’s arming of terror groups such as Hezbollah; for example, it could reliably destroy Tomahawk cruise missiles fired from U.S. aircraft.[xx] In the near future, Russia may threaten to sell the more advanced S-400 system to Iran as leverage against the United States.[xxi]

2008: The last of the initial S-300PT systems are retired from Russian military use.

1993: Almaz begins production of the S-300PMU-1, a downgraded version intended for export sales.