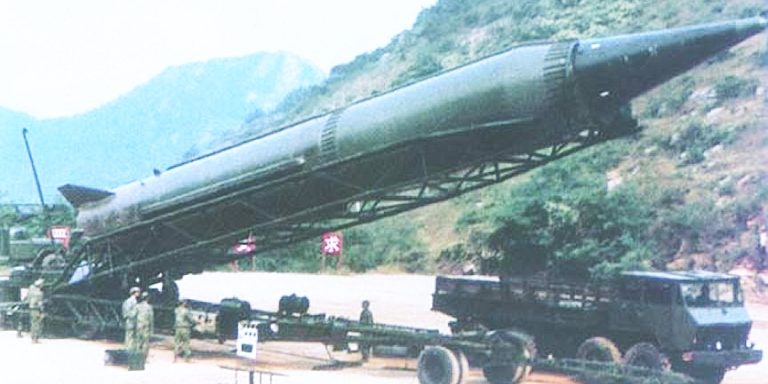 Designed to be China’s first modern missile, the DF-3 carries a range of up to 3,000km and was deemed operational in 1971. The silo-based, single-stage, IRBM uses a liquid propellant and an inertial guidance system.[i] The DF-3, and its improved variant the DF-3A, have largely been replaced by the DF-21 and only a minimal number of DF-3 missiles are suspected to exist today. Many outmoded DF-3 missiles have been outsourced to Saudi Arabia as well.

The DF-3A is an upgraded variant of the DF-3 that became operational in August 1988. Like the DF-3, the DF-3A lacks significant road-mobile capabilities however it is deployed using a towed launcher. The improved missile possesses a range of up to 4,000km and a more accurate guidance system than the DF-3. Both missiles share the same propellants, diameter, and burn time, however the DF-3A has an improved version of the YF-2 engine.[ii]

As China’s first missile with the ability to reach U.S. basing in the First Island Chain, the IRBM provided China with many new striking capabilities and opportunities. The DF-3 also granted China the power to successfully launch space vehicles and satellites such as the CSL-1 and the CZ-1.[iii] Establishing China as a force to be reckoned with in regards to ballistic missiles, the DF-3 and the DF-3A proved that China possesses the technological capacity to produce IRBMs and granted China the chance to expand their A2/AD range. This also paved the way for many of China’s advances in ballistic missiles such as the D-21 and its several variants.[iv]