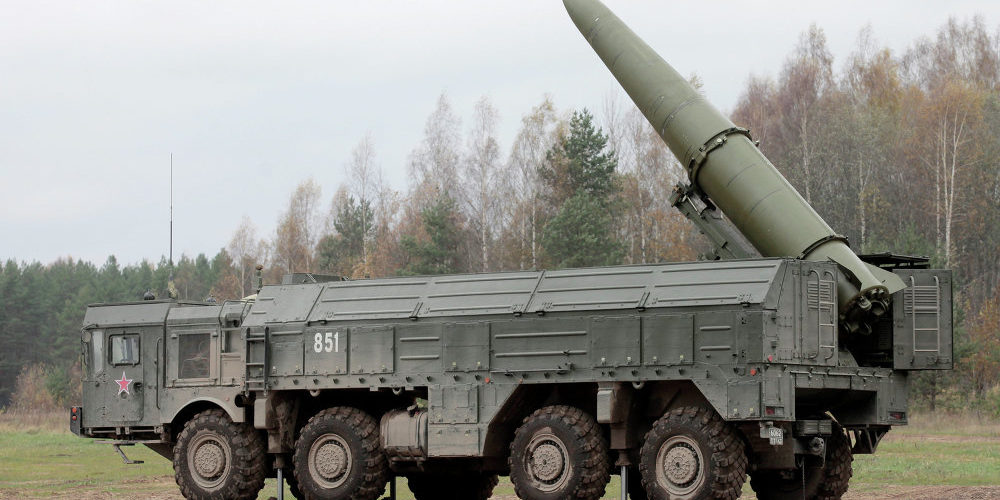 The Iskander (SS-26 Stone) began development in the early 1970s to replace the Scud-B, however, its development was accelerated to replace the SS-23 Spider, which Russia retired in 1988 because of restrictions mandated by the INF Treaty. There are two versions of the missile, the Iskander-M and the Iskander-E, the latter solely for export. The Iskander-M was operationalized in 2006 and is currently fielded by the Russian Army. It has a range of 400-500 km and uses both inertial and optical guidance systems to achieve an accuracy of 10-30 m CEP. It can carry conventional and nuclear warheads up to 700 kg and employs a maneuverable re-entry vehicle (MaRV) and decoys to defeat theater missile defense systems. Conventional warheads that can be equipped by the Iskander include cluster warheads, fuel-air explosives, bunker-busters, and electromagnetic pulse (EMP) warheads. [1] The missile was first combat-tested in 2008 during the Russo-Georgian War, when several conventionally-equipped Iskander-Ms were used by the Russian Army to strike targets in Gori, Georgia. [2] By 2016, the Russian Defense Ministry plans to buy up to 120 Iskander-Ms and distribute them amongst five missile brigades. [3]

The Iskander-E variant – purposed for export – has a range of 280 km and a warhead capacity of 480 kg. Like the Iskander-M, this version also has an inertial guidance system that gives it an accuracy of 30-70 m CEP. Reports indicate the Iskander-E has been exported to countries such as Syria. [4]

Both versions of the missile use a road-mobile TEL that can carry up to two missiles, each independently targetable and capable of changing targets in-flight. Accompanying the TEL is a loader-transporter, routine maintenance vehicle, command post vehicle, information post, ammunition equipment set, and training aids. [5] The Iskander is equipped with various systems for in-flight correction and self-targeting, allowing the missile to overcome missile defense systems. [6] Russia has also reportedly developed a cruise missile version called the R-500 or Iskander-K that is currently operational and capable of being launched by the Iskander TEL. Russian news sources state the Iskander-K has a range of 500 km, but other sources argue the range could be at or easily extended up to 2,000 km.

The Iskander has become the weapon of choice for Moscow when making threats throughout Europe. In 2012, then-acting Defense Minister Anatoly Serdyukov warned that the Iskander could be used to target missile defense systems in Europe, including a threat to deploy some of the missiles to Kaliningrad, a Russian exclave bordering Baltic NATO members Poland and Lithuania. [7] In 2015, Russia briefly deployed Iskander missiles to Kaliningrad to demonstrate its quick deployment abilities during military exercises, yet, some reports and Polish defense officials believe Russian Iskander-Ms are still deployed in the exclave today. Recently, Russia has threatened to deploy the Iskander-M to Kaliningrad in response to NATO BMD and the U.S. European Phased Adaptive Approach (EPAA), placing the future Aegis Ashore site in Redzikowo, Poland within range of Russia’s short-range missiles.

There has also been speculation that the Iskander could be deployed in the recently annexed region of Crimea. In November, the Russian Defense Ministry acquired their fifth Iskander-M brigade and sources from social media all the way up to the Ukrainian General Staff claimed to identify Iskander deployments in the territory. [8] Because the Iskander can be fitted with tactical nuclear weapons, this gives Russia an ideal means to deliver smaller nuclear strikes deep into Europe, and potentially signals that the disputed Crimea region falls under the Russian nuclear umbrella. [9] In March 2016, it was reported that Russia had deployed at least one Iskander missile system to its Humaymim Air Base in Syria. [10]

March 2016: Russia is speculated to have deployed at least one Iskander missile system to its Humavmim Air Base in Syria.

December 2015: Iskander-M was launched during military drills in Leningrad region. [14]

July 2015: Russian military exercises in the Southern Military District including the launching of the Iskander-M missile system. [17]

March 2015: The Iskander-M was deployed to Russia’s Southern Military District located in the East Siberian Republic of Buryatia. [18]

2015: Russia temporarily deployed the Iskander to Kaliningrad as part of a military training exercise.

September 2014: Russia fired the Iskander-M during training maneuvers in the Eastern Military District. [19]

2010: Russia received six Iskander systems in 2010, the first being deployed in the Western Military District. [20]

2006: The Iskander-M was operationalized by the Russian Army.