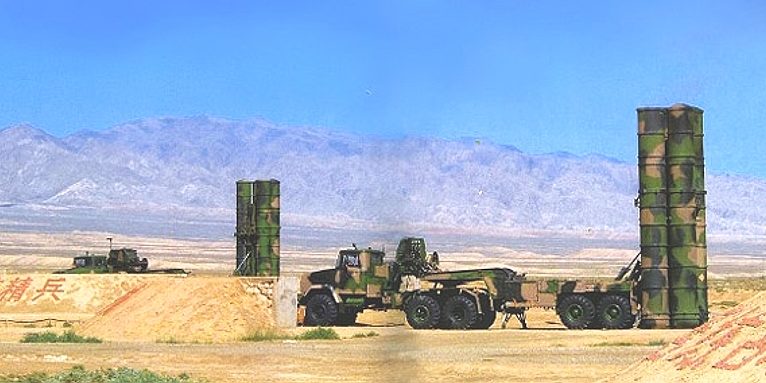 The Hong Qi-15 (HQ-15, previously referred to as the HQ-10) is a Chinese reverse-engineered copy of the Russian S-300PMU-1 aerial defense system. The first “deep modernization” of the S-300 series yielded the S-300PMU-1, which is designed to destroy anti-ballistic missiles.[i]The HQ-15 boasts extended radar footprints, more efficient automation, and advanced defensive capability against ballistic missiles “with re-entry speeds of up to 2.8 km/sec,” which make it comparable to the American PAC-2 system.[ii]The ABM ability is made possible due to 64N6E Big Bird radar, which has an aperture 30 percent wider than the U.S. TP/SPY-1 Radar.[iii]Further development of the HQ-10 precipitated the HQ-15, which is much more commonly used and is comparable to the S-300PMU-2. A typical HQ-15 battery includes Clam Shell continuous wave pulse Doppler acquisition radar, Flap Lid phased-array engagement radar, Big Bird F-band long-range surveillance and tracking radar, and up to 12 launch vehicles with capacity for four missiles each, along with command-and-control and generator units.[iv]Since the PLA initially imported several dozen S-300PMU-1 units in 1993, the system has been reverse-engineered and reproduced (the HQ-10) and upgraded with extended engagement range (HQ-15).[v]

The HQ-15 offers reliable protection for Chinese military assets around Beijing and Shanghai, and nearly guarantees China the ability to destroy Tomahawk cruise missiles in the event of a conflict. China continues to deploy HQ-15 batteries along its eastern coastal zone, which produces up to 60 percent of Chinese gross domestic product, as well as near the Taiwan Strait.[vi]The range the 64N6E Big Bird radar affords would prove challenging for U.S. and allied forces to deal with, plus HQ-15 can dispatch most Taiwanese Mirage-2000 fighters. Only the Lockheed Martin F-22 Raptor, F-35 Lightning, and Northrop Grumman B-2 Spirit stealth bomber can operate in airspace protected by the HQ-15. Moreover, China is attempting to upgrade the HQ-15 to achieve capability comparable to the S-400 system.[vii]Such a feat would jeopardize some American stealth aircraft and counter the threat of deterrence posed by most cruise missiles.[viii]

October 1999: The PLA unveils its upgraded S-300PMU-1 systems, redesignated the HQ-15, in a military parade, stationing several around the eastern coastal zone.[x]

1995:Russia gives the PLA permission to license its S-300PMU-1 system for export and modification.

1993:Almaz begins production of the S-300PMU-1, a downgraded version intended for export sales.[xii]