The Shahab-2 is a short range ballistic missile derived from the SCUD-C. The Shahab-2 has a maximum range of 500km (310 miles), making it capable of striking several urban areas and military sites near Iran’s borders. The Shahab-2 is liquid fueled, and can typically carry a nuclear or conventional high explosive warhead with a payload of around 770kg. [1] As a road mobile system, the Shahab-2 can be launched from any location. With help from North Korea, Iran acquired the ability to produce the Shahab-2 domestically in the early 1990s. [2] North Korea continued to help Iran develop the Shahab-2, but Iran also sought technical assistance from China and Russia. [3] By 1997, Iran reportedly established the capacity to produce the Shahab-2 missile, though they are still reliant on foreign missile components. [4] 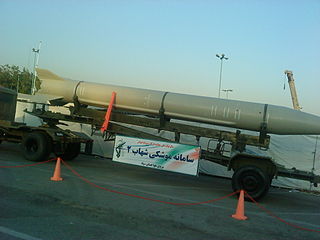