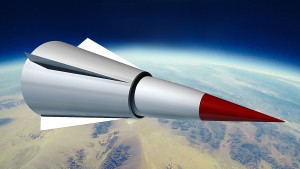 An artist’s rendition of the DF-ZF, China’s hypersonic missile that is currently in the testing phase of development

Hypersonic weapons incorporate the speed of a ballistic missile with the maneuvering capabilities of a cruise missile. Hypersonic weapons refer to weapons that travel faster than Mach 5 (~3,800mph) and have the capability to maneuver during the entire flight.  As a pentagon report stated, “While the designed speed of the hypersonic missile is faster than that of sound, its advantage lies in its enhanced maneuverability and smooth flight path, which is much harder to track than that of traditional missiles.”[i]

Hypersonic weapons are specifically designed for increased survivability against modern ballistic missile defense systems. These missiles are capable of delivering conventional or nuclear payloads at ultra-high velocities over long ranges. Hypersonic missiles are delivered in two ways: (1) they can be fired from the last stages of Intercontinental Ballistic Missiles (ICBM) or Submarine-Launched Ballistic Missiles (SLBM) and skip along the top of the atmosphere using specialized jet engines to accelerate to hypersonic speeds; or (2) they can be launched independently or released from a bomber—similar to cruise missiles—before accelerating to ultra-high speeds.[ii]

Hypersonic vehicles typically consist of a Supersonic Combustion Ramjet, or Scramjet propulsion system to enable such high speeds. A Scramjet engine is an engine that uses “air breathing” technology.[iii] This means that the engine collects oxygen 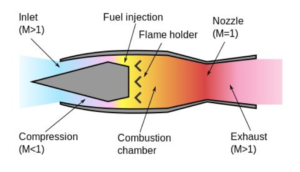 from the atmosphere as it is traveling and mixes the oxygen with its hydrogen fuel, creating the combustion needed for hypersonic travel.[iv] This is different than a traditional ramjet, which is used on space shuttles and satellite launches.[v] The traditional ramjet engine carries liquid oxygen, and hydrogen together, adding a tremendous amount of weight to the vessel.[vi] Most of the added weight comes from the liquid oxygen (the oxidizer), which is nearly 70% of the fuel used in space launches.[vii]

For a scramjet to work the air traveling into the engine must already be at supersonic speed.[viii] This is so the air is properly condensed to the required density to effectively combust with the hydrogen mix. To reach supersonic speed, the vessel is usually launched with a traditional booster engine, and once it has reached the proper speed and altitude (generally around Mach 5 and 100,000ft) the scramjet is activated.

Other options currently in development are dual mode ramjet (DMRJ), which works as a ramjet until the craft reaches proper speed and altitude, and then begins to work as a scramjet. By using the DMRJ, the vessel can operate without a booster, which allows it to operate in a more clandestine manner.

In contrast to conventional Reentry Vehicles (RV) that travel at supersonic speeds (between Mach 1 and Mach 5), hypersonic weapons travel along the edge of space and accelerate to between Mach 5 (around 3,800 mph) and Mach 10 (over 7,500 mph). While conventional ballistic missiles are launched at steep trajectories that inhibit speed during the high friction of launch and reentry, hypersonic missiles glide atop the atmosphere while engaging specialized jet engines to perpetually accelerate up to hypersonic speeds.

This ability to travel at ultra-high velocity is the primary appeal of hypersonic missiles because it extends their range and allows them to bypass modern layered missile defenses.[ix] Hypersonic missiles are also capable of maneuvering in flight, allowing them to evade missile defense tracking systems and interceptors. This is in contrast to conventional RVs, which descend through the atmosphere on a predictable ballistic trajectory that can be tracked and intercepted by modern missile defense systems.

The United States:  The United States has invested in research and development of a hypersonic missile called the Advanced Hypersonic Weapon (AHW), which uses boost glide technology to propel warheads with conventional—rather than nuclear—payloads.  During a test in 2011, AHW was launched from the Pacific Missile Range Facility in Kauai, Hawaii, to the Reagan Test Site on the Marshall Islands. The glide vehicle successfully struck a target that was located 3,700 km away, demonstrating the long-range and high precision of the AHW.[x] 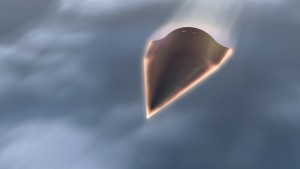 An artist’s rendition of the HTV-2

Lockheed Martin is developing a hypersonic vehicle called the Falcon Hypersonic Technology Vehicle 2 (HTV-2), which is a maneuverable rocket-launched aircraft that glides through the Earth’s atmosphere at speeds up to Mach 20 (13,000 mph).[xi] Equipped with numerous sensors to collect data while the vehicle is in hypersonic flight, the HTV-2 is representative of a U.S. initiative to research and develop technologies that make long-duration hypersonic flight a reality. The United States plans to use the HTV-2 and AHW for “Prompt Global Strike,” which would allow the U.S. to launch a conventional hypersonic strike against targets anywhere on the planet in less than one hour.

China: Since 2014, China has been developing its hypersonic weapon capabilities with advancements in both hypersonic glide vehicles (HGV) and hypersonic cruise missiles. DF-ZF, a hypersonic glide vehicle known in the United States as the WU-14, has undergone more than a half dozen development tests between 2014 to 2016.[xii] The DF-ZF is launched during the last stage of a missile and can reach nearly 7,500 mph (Mach10), as well as maneuver to avoid missile defenses and zero in on targets. This weapon can be configured to carry a nuclear or conventional warhead and China claims it is precise enough to attack ships at sea. The DF-ZF is scheduled to be operational as early as 2020.[xiii]

The Chinese Military has also been testing the DF-17, a ballistic missile combined with an HGV. The DF-17 has undergone two tests both in November 2017. The missile has an estimated range of 1,100 to 1,500 miles and can reach mach 10, without losing any of its maneuverability.[xiv] It is also expected to be operational by 2020.

Russia: Russia has been designing and testing various hypersonic glide vehicles (HGV) and hypersonic cruise missiles. Avangard, a hypersonic glider previously known as ‘Project 4202’ or ‘Yu-71’, has been tested multiple times since February 2015.[xv] It can reach speeds of Mach 20 (~15,000 MPH) and is capable of sharp high speed evasive maneuvers in flight.[xvi] In March 2018, Russian President Vladimir Putin announced that the testing of the weapon was complete and that it had entered series production. It’s set to become operational in late 2018 or early 2019, nearly five years ahead of schedule.[xvii]

As a part of a joint venture with India, Russia has also been working on its BrahMos-II hypersonic cruise missile. Testing on the missile has only recently started, with the first test flights planned for 2020. When it enters service with the Russian and Indian Armed Forces, likely in 2025, BrahMos-II will be one of the world’s fastest hypersonic cruise missile, reaching speeds of Mach 7 (~5,000 MPH).[xviii]

The 3M22 Zircon is a maneuvering anti-ship hypersonic cruise missile being developed in Russia. Its latest successful launch was in June 2017, where it was reported that it had reached Mach 8 (~6,000 MPH).[xix] The original 3M22 Zircon has a range of 620 miles, but there are plans to build an export version with a shorter range in compliance with the Missile Technology Control Regime (MTCR).[xx] The missile will be incorporated into the Kirov-class battlecruiser Admiral Nakhimov in 2018 and the Pyotr Velikiy in 2022.[xxi] Production of the 3M22 is set to begin late 2018 at the earliest.

A second Russian hypersonic cruise missile in development is the KH-47M2 Kinzhal. The Kinzhal missile, a modified version of the surface-launched Iskander rocket, can reportedly travel as fast as Mach 10 over a distance as great as 1,200 miles, all while maneuvering.[xxii] Kinzhal is designed to counter US missile defense systems like THAAD and heavily defended US aircraft carriers.[xxiii] It was revealed to the world in March 2018.[xxiv] As of May 5, 2018 ten MiG-31 fighter jets have been fitted with Kinzhal missiles and are on test combat duty. According to Russian Deputy Defense Minister Yuri Borisov, the Kinzhal outfitted jets are ready for use depending on the situation.[xxv]