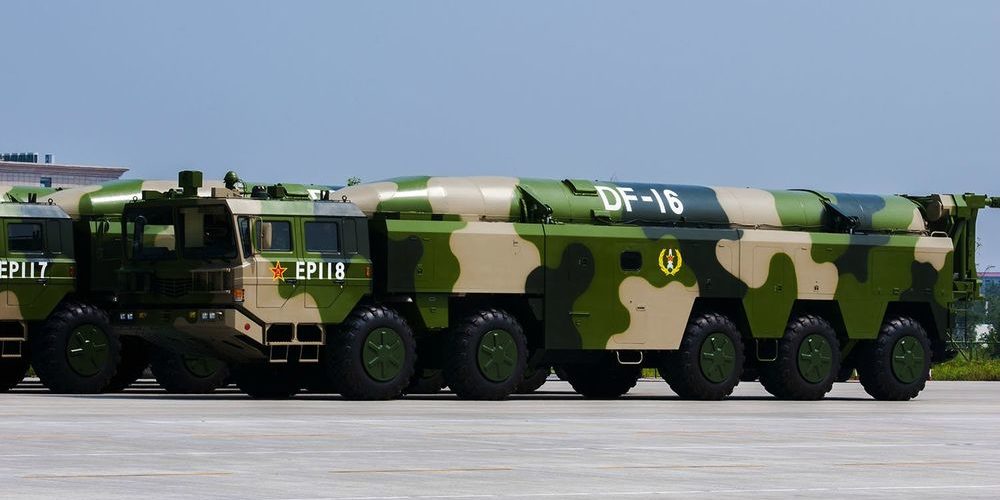 The DongFeng-16, or DF-16, is a multistage short-range ballistic missile (SRBM) and is one of China’s most advanced SRBMs. First deemed operational in September 2015, the new weapon system has achieved 11 successes out of 11 test launches and is an improvement model of the DF-11 and the DF-15.[i] The multistage, solid propellant missile possesses a range of around 1,000 km and is MIRV capable of carrying up to 3 nuclear warheads with a payload of up to 1,000kg. Deployed on a five-axle Sanjian Corporation TEL, the DF-16 is road-mobile and is launched from a vertical position. Using both inertial and GPS guidance systems, the missile is highly accurate with a CEP of 5m and capable maneuvers to avoid missile defense systems during the terminal phase.[ii] China is presently suspected to have approximately 50 operational DF-16 missiles. The SRBM was publically shown for the third time during a military exercise in China on February 6, 2017.

The DF-16 fills a gap in the nation’s arsenal and is one of China’s most accurate missiles capable of striking static and slow moving targets.[iii] China’s latest invention is intended to breach U.S. defenses such as the Patriot and THAAD systems as well as counter the U.S. AirSea Battle Concept, or JAM-GC.[iv] The DF-16 also signifies an increased threat to Taiwan because of its extended range and payload, and it is also more difficult for anti-ballistic missile systems, such as the Patriot/PAC-3, to intercept. According to the Department of Defense, all Chinese SRBMs are deployed near Taiwan with the most recent move being to the mainland’s southeastern coast.[v] The DF-16 can also reach all targets within Japan and the Pacific first island chain.[vi]

Improved nuclear-capable missiles such as the DF-16 bring into question China’s No-First-Use Policy and the 2010 & 2013 China Defense White Papers. Although China continues to advocate for negotiations and non-nuclear tactics, their latest Defense White Paper did not use the term “no first use” whatsoever which leads many to think that China may be diverging from its traditional nuclear practices.[vii] These alterations in China’s nuclear behavior have insinuated that the state may be attempting to move from a strategy of minimum deterrence to one of limited deterrence.[viii]