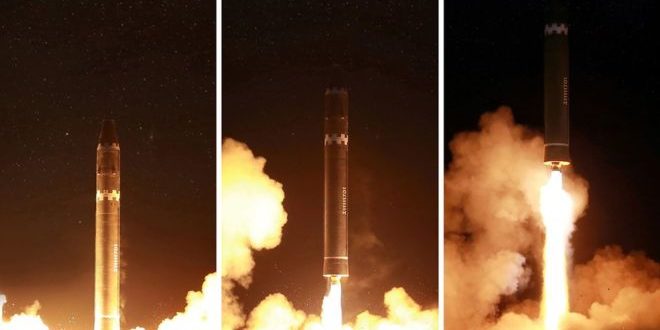 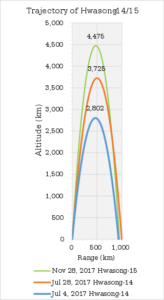 On November 29, 2017 around 3:00am Pyongyang Time, North Korea test fired a ballistic missile from the Sain-ni area. This test came after a two-month lull in North Korean missile tests. The test was a milestone as it marked the longest flight of a North Korean ICBM and theoretically puts the whole continental United States in range. During the test, the Hwasong-15 flew for approximately 54 minutes, reached an altitude of 4,500 km, and traveled approximately 960 km.[i] The missile is believed to have broken into three pieces before landing in the Sea of Japan, in Japans exclusive economic zone.[ii]

While early reports identified the missile as the Hwasong-14, the missile was later confirmed to be the new Hwasong-15, which is much larger than the Hwasong-14. The Hwasong-15 is a two-stage missile, that most likely uses liquid fuel for both stages, that has a wider and blunter nose cone than the Hwasong-14, indicating it could carry a super-large heavy nuclear warhead on its tip. According to analysts, images also indicate it has a two-staged main gimbaled engine system, something not yet seen in North Korean missiles. In a gimbaled system, the exhaust nozzle of the engine itself can be moved side to side, allowing for more accurate steering.[iii] All of these improvements indicate that the missile appears capable of delivering a nuclear warhead to ICBM ranges and surviving atmospheric re-entry.

Debuted alongside the missile was a larger, more capable transporter erector launcher (TEL). The new transporter has nine-axles, larger than the eight-axle transports seen in previous launches. Kim Jong Un is quoted as saying the new transporter is “100 percent” a domestic product of North Korea, but western analysts say it is likely a truck obtained years ago from China which has since been modified.[iv] 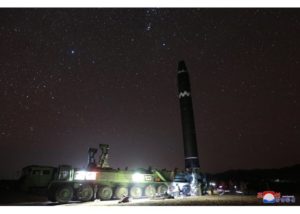 The missile’s successful test on November 29, 2017 marked a significant leap forward for North Korea’s missile program, and North Korea will likely put considerable resources behind the Hwasong-15’s production and deployment. The Hwasong-15’s estimated 13,000 km range, as demonstrated by this test, indicates that the missile could be used to strike anywhere in the United States and Europe, leaving only Antarctica and South America out of range.[v] If North Korea is able to miniaturize its nuclear weapon capability and pair a nuclear warhead to the Hwasong-15 ICBM, Pyongyang would be able to hold the entire U.S. population at risk; providing the Kim regime with substantial strategic leverage.