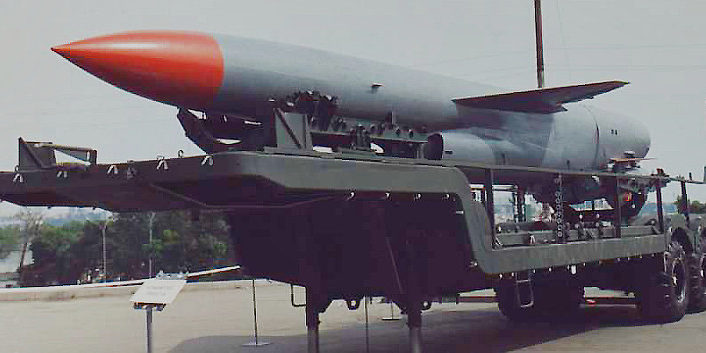 The P-700 Granit or the SS-N-19 Shipwreck is a Russian naval anti-ship cruise missile. It can be launched via ship or submarine but can also be used against ground targets.[i] The Granit was developed as a more successful turbojet alternative to the Bazalt in order to compete against the United States’ anti-ship weapons in the 1970’s.[ii] It features a high explosive or nuclear warhead with an explosive yield of 350 kt. The missile can reach speeds of more than Mach 2.5 and has a range of 625 km. The Granit missile is still operational today and is deployed on two cruisers and one aircraft carrier.[iii]

Designed to defend against United States’ Navy carrier battle grounds, the Granit remains strategically valuable today because of its unique guidance system. When fired in a swarm (group of 4-8 weapons), one of the weapons climbs to a higher altitude and designates targets while the others attack.[iv] If the designating missile is destroyed, another missile will rise to take over the same purpose. They attack targets in order of priority, highest to lowest, using information gathered on targets during flight. The missile can also counter attacking anti-missiles and its on-board computer carries data to evade electronic countermeasures, ensuring a successful target hit.[v] Due to the missile’s size, it can only be deployed in small numbers on Oscar-class submarines, Kirov-class battlecruisers, and the Admiral Kuznetsov aircraft carrier. In the future, it is possible that the Granit missiles will be replaced with smaller Oniks and Kalibr cruise missiles in greater numbers.