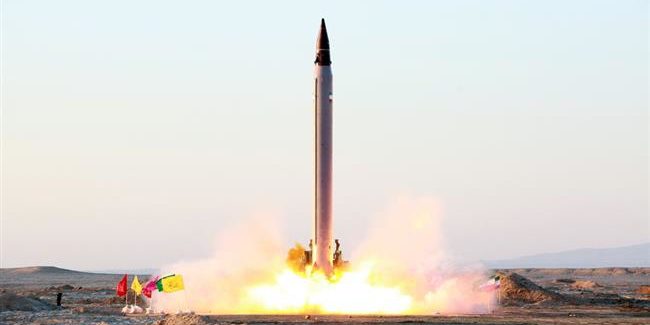 The Emad is Iran’s first precision-guided, long-range, surface-to-surface ballistic missile. It has a range of roughly 1,700 km and can carry up to a 750 kg payload. [1] The Emad is a variant of the Shahab-3 missile, which was modeled off of North Korea’s Nodong missile, but the Emad has improved accuracy to within 500 meters of its target. [2] The increase in precision of the Emad is partially due to the use of a maneuverable re-entry vehicle (MaRV). MaRV’s increase the accuracy of missiles by compensating for reentry errors and containing sensors that allow the missile to hone in on specific coordinates or target signatures. [3] In addition to accuracy, MaRV’s also increase the survivability of ballistic missiles because the flight path of the missile can be changed after it is launched, making it more difficult for ballistic missile defense (BMD) systems to intercept. [4] The Emad is also road mobile, allowing it to be moved around and launched from virtually anywhere within Iran, increasing its survivability. [5]

The range and improved accuracy of the Emad makes it a threat to surrounding Middle Eastern and Central Asian countries, in particular, Israel. The Emad also increases Iran’s strategic deterrence capability according to Defence Minister Hossein Dehghan [6] and its accuracy allows the missile to be used for a variety of roles, including targeting of military bases or economic assets rather than population centers. [7] The precision-guidance of the Emad continues an Iranian trend towards improving the accuracy of its ballistic missiles.

Iran’s testing of the Emad raises concerns that Iran may be in violation of U.N. Security Council Resolution 1929. This resolution prohibits Iran from engaging in any activities related to ballistic missiles that are capable of delivering a nuclear warhead [8] which likely includes the Emad. However, top Iranian officials have emphasized that they will continue to develop and increase Iran’s defense and missile capabilities and that there is no intention of aggression behind their actions. [9]