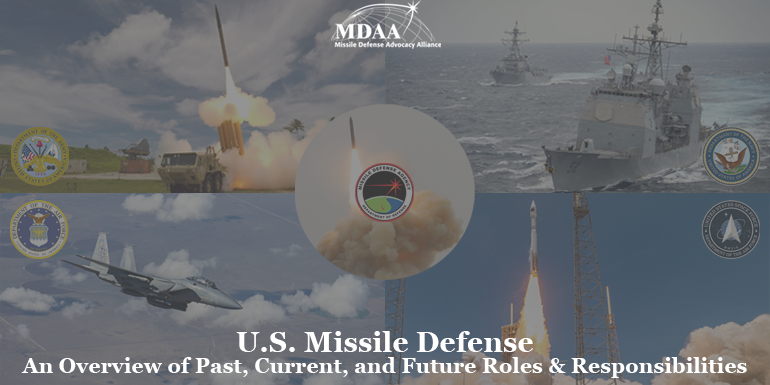 The Missile Defense Advocacy Alliance (MDAA) released its first capstone effort to reform U.S. missile defense roles and responsibilities for the rapidly evolving era of great power competition. To meet the missile defense threats of both today and tomorrow, MDAA’s proposal outlines how and why the roles and responsibilities of the Services, Combatant Commands, and the Missile Defense Agency must change, and change soon.

“Over the last two decades, I have fought for a robust, integrated, and layered missile defense for our country,” said Riki Ellison, Founder, and Chairman of the Missile Defense Advocacy Alliance and three-time Superbowl Champion. “I know firsthand that in football, defense wins. In the real world though, this principle is even more important because our country’s defense cannot fail, ever. Unfortunately, today’s missile defense is ill-prepared to defend against the emerging threats from China and Russia. MDAA’s recommendations on roles and responsibilities are a foundational step to ensure a highly capable and well-resourced missile defense.”

“Missiles are a primary weapon of modern warfare as vividly shown by Russia’s heavy use of ballistic, cruise, and hypersonic missiles in attacks on Ukraine”, said former Under Secretary of Defense for Policy John Rood. “This is the same trend we have seen in the Middle East and Asia with potential adversaries like China, North Korea, Iran, and its proxies the Houthis. The United States has allowed our missile defense capabilities to fall behind the threat by walking back authorities for the Missile Defense Agency to rapidly develop and field capabilities and under-resourcing this area – a trend that must be rapidly reversed.”

“The joint force desperately needs a cost-effective land-based cruise missile defense system that can handle the high-capacity cruise missile threat it faces from both China and Russia. The Army needs to accelerate its efforts to deliver the Indirect Fire Protection Capability, its absence is hobbling the joint force.” Stated RADM (ret.) Mark Montgomery, the former Director of Operations at U.S. Indo-Pacific Command.

MDAA’s Missile Defense – Roles and Responsibilities
With each passing day, the threats – both conventional and nuclear – from adversary hypersonic missiles, long-range cruise missiles, and ballistic missiles increase and become more dangerous to the U.S. and its allies and partners. From China’s recent hypersonic test to renewed North Korean intercontinental ballistic missile (ICBM) tests, it is clear that our adversaries see great value in holding hostage American cities, forces, and allies. In fact, over the last month, the world has seen firsthand the brutal effect of Russian long-range strike capabilities in Ukraine. Entire cities have been ravaged and thousands of civilians killed or injured by Russian ground, air, and ship-launched ballistic and cruise missiles. This is an inflection point in the history of missile defense.

Clearly acknowledging the emerging missile threats, the MDAA’s “Missile Defense – Roles and Responsibilities” (MD – R&R) capstone document was produced with input from numerous experts who have served in the White House, the Department of Defense, and Congress. This document looks back through the lens of the last several decades, to help chart a new course to revolutionize and modernize U.S. missile defense. Specifically, the MD – R&R outlines critical changes to missile defense policies, acquisition processes, and service-specific roles that are needed to address the dynamic and dangerous threats that we face from adversary hypersonic missiles, long-range cruise missiles, and ballistic missiles. These adversary threats – either conventional or nuclear – continue to evolve and so must the manner in which the United States plans, organizes, and resources for both regional and homeland missile defense.

Key Findings of the MD – R&R
• Prioritize Missile Defense as a Core Mission: For too long, parts of the U.S. military have neglected the missile defense mission. To reverse this, the Secretary of Defense is called upon to direct each of the Military Services to treat missile defense as a core mission area – and to fund it accordingly.
• Role of MDA: The Missile Defense Agency (MDA) – as the lead architect for missile defense – should have its original fast-track authorities restored so it can rapidly develop and acquire missile defense systems to deter and defeat ballistic missiles, hypersonic glide missiles, and complex hypersonic and long-range land-attack cruise missiles. In another change from current policy, once developed by MDA, these systems should be transferred to military services for rapid, full-rate production and sustainment.
• Get the Services Engaged on Missile Defense: In recent years, the U.S. Army has under-resourced its land-based cruise missile defense responsibilities in favor of other priorities. The MD – R&R stops just short of calling on the Secretary of Defense to pull responsibility for the operation and sustainment of land-based air and missile defense from the Army. Instead, the MD – R&R recommends that the Secretary of Defense direct the Army to properly resource this critical mission and, if the Army does not respond, it recommends that the Secretary of Defense initiate a study of how to transfer this mission to the U.S. Air Force. In addition, the U.S. Air Force should be given a new authority to protect its own maneuver forces in expeditionary locations, similar to existing authorities for the U.S. Army and U.S. Navy.
• New Combatant Command, New Role within Missile Defense: As the Combatant Command in charge of the newest warfighting domain, the U.S. Space Command should assume the lead responsibility – replacing U.S. Strategic Command – for synchronizing the missile defense efforts of the Unified Combatant Commands.

Spokesmen: Riki Ellison, Founder and Chairmen of MDAA, John Rood, Former Undersecretary of Defense for Policy at the Department of Defense, and Mark Montgomery, Senior Director of the Center on Cyber and Technology Innovation at the Foundation for Defense of Democracies.

To view our virtual roundtable discussion “U.S. Missile Defense – An Overview of Past, Current, and Future Roles and Responsibilities” on Wednesday, April 13, 2022, from 10:00 AM –11:00 AM (EDT) click here or visit our YouTube page at: https://www.youtube.com/c/MissiledefenseadvocacyOrg1/featured