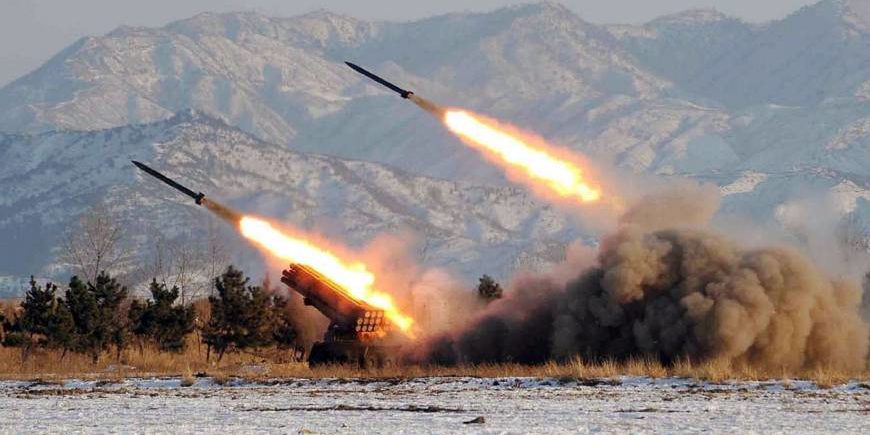 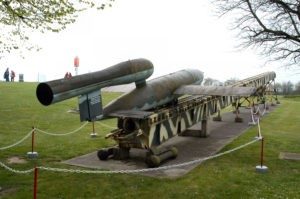 On June 13, 1944 Germany launched the first V-1 flying bomb—also considered the first cruise missile—attacks on Britain. Germany launched ten V-1s, but only four landed in the target country, with one killing six people in London.[1] Over the next nine months Germany launched approximately 10,000 V-1s—launched from either ground or air platforms—at targets in Britain and approximately 9,000 at targets in Continental Europe. However, only 25% of the V-1s launched by Germany successfully reached their target.[2] Approximately 6,200 British were killed and 18,000 injured by the V-1.[3] The last V-1s were launched on March 29, 1945.[4] 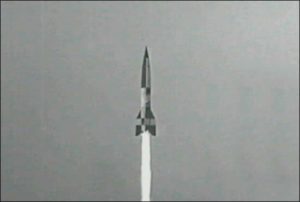 On September 8, 1944 Germany launched the first V-2 rocket—also considered the first ballistic missile—attacks on London and Paris.[5] Developed in the 1930s and early 1940s, the V-2 was launched from a mobile platform and carried roughly 900 kg of explosives.[6] The rocket was inaccurate, equipped with crude guidance technology, but was purposed to strike large targets such as cities. In almost seven months, Germany launched 3,172 V-2 rockets against the Allied cities of London, Paris, Antwerp, Lille, Norwich, and Liege, killing over 7,183 people.[7] Germany launched its last V-2 rockets on March 27, 1945 and killed 162 people.[8] After the collapse of Nazi Germany, many German scientists and engineers diffused to the United States and Soviet Union, bringing with them blueprints for the V-2. Using the German rocket as an engineering foundation, both Cold War superpowers were able to produce advanced rocket and ballistic missile capabilities in the decades after the Second World War.

During the war, Iraq fired 516 Scud B and Al-Hussein missiles at Iran, while Iran fired 117.[9] Of the 117 fired by Iran, approximately 60 missiles were fired at Baghdad. On numerous occasions throughout the war, both sides were reported to have used ballistic missiles indiscriminately, targeting cities rather than military forces. Most indiscriminate missile attacks are believed to have been carried out by Iraq.[10] 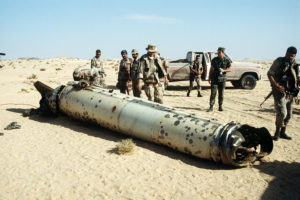 Iraq fired approximately 93 Al-Hussein and Al-Hijarah missiles armed with conventional warheads during the First Gulf War.[12] Around half of the missiles were fired at coalition forces, with the other half being fired at Israel. It was reported that Iraq also fired a missile at Saudi Arabia, striking the Saudi capital of Riyadh. In early 1991, Iraq fired a Scud missile that struck Tel Aviv one day after the United States Launched Operation Desert Storm.[13]

After the First Gulf War, Iraq’s missile program was mostly terminated when the UN Security Council prohibited Iraq from possessing ballistic missiles exceeding a 150 km range.[15] According to a report from the Army Iraq fired at least 23 ballistic and cruise missiles during the three-week span it took U.S. forces to fight their way to Baghdad.  Of the 23 missiles launched, 9 were intercepted, 4 were outside of the Patriot’s range, and one exploded right after launch. None of the missiles fired were Scuds.

Israel and Its Neighbors 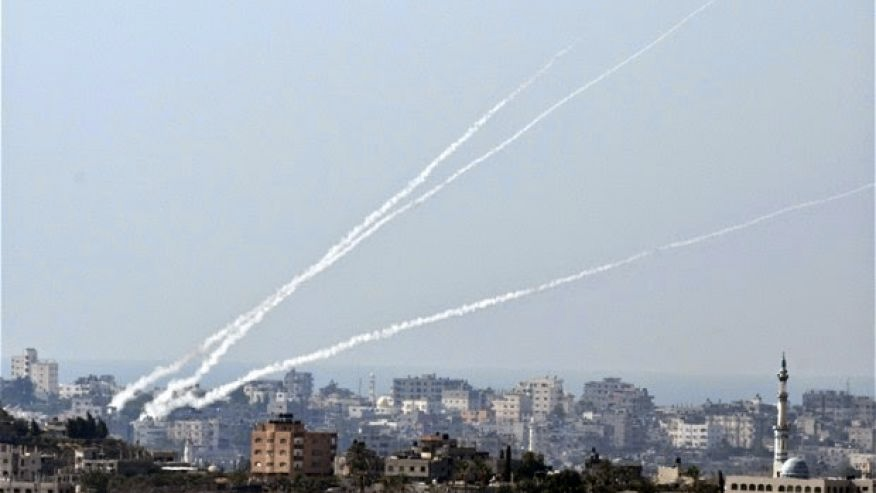 Rockets fired at Israel from the Gaza Strip.

Palestinian groups including Hamas fired over 3,000 rockets and mortars into Israel, killing 3 civilians and 6 soldiers.[16]

Palestinian groups including Hamas and the al-Qassam Brigades fired over 1,500 rockets into Israel, killing 4 civilians and 2 soldiers.[17] The Iron Dome missile defense system was essential to this, shooting down 85% of targets.

Since March 2015, Houthi forces have taken over much of Yemen—including its missile stockpiles—and have launched tens of Tochka, Scud B, Scud C, Zelzal-3, and Qaher-1 short-range ballistic missiles into Saudi Arabia, in response to Saudi intervention in Yemen’s civil war.[19] These attacks have killed hundreds of Saudi and Gulf Cooperation Council (GCC) coalition forces. In October of 2016, Houthi rebels fired several anti-ship cruise missiles at U.S. vessels operating in the Red Sea, forcing the ships to use defensive measures–including decoys and air defense interceptors–to prevent from being struck. In November 2017, Houthi rebels fired a long-range Burkan 2-H missile that traveled over 800 km towards Saudi Arabia’s capital, Riyadh. The Patriot missile defense system destroyed the missile before impact. No casualties were reported.[20]

In June 2017, Iran fired six Zolfaghar ballistic missiles from its western provinces into eastern Syria, targeting Islamic State fighters operating in the war-torn country. Tehran claimed the missile strike was in retaliation to Islamic State-claimed terrorist attacks that occurred in Iran earlier in the month, and also used the missile strike to send a strategic message to some of Iran’s regional adversaries: primarily the United States and Saudi Arabia. [21] The Syrian government, headed by Bashar Al-Assad and backed by Russia and Iran, maintains an arsenal of imported battlefield-short-range and short-range ballistic missiles. Israeli reports claim that by November 2015, the Assad regime had exhausted 90 percent of its ballistic missile arsenal fighting rebel groups in the country’s civil war. Included in these reports are claims that some of Assad’s ballistic missiles have fallen into the hands of rebel groups and non-state actors operating in Syria; with some missiles being transferred to non-state actors such as Hezbollah, which operate inside the neighboring country of Lebanon. [22]