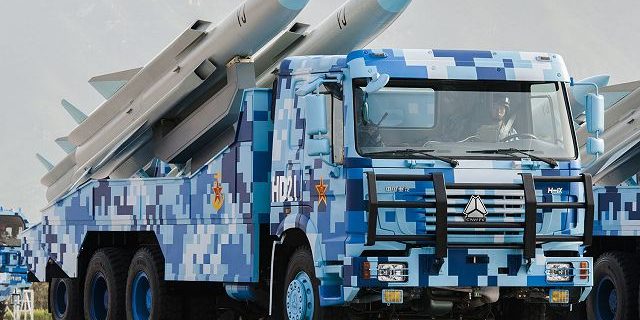 The YJ-12 is an air-launched, anti-ship cruise missile (ASCM) that China deploys on its H-6K medium-range strategic bombers. The YJ-12 has a range of 400 km, can reach speeds of up to Mach 3, and is capable of performing air-borne evasive maneuvers before hitting its target. [1] China began developing the YJ-12 during the 1990s, and began deploying it aboard its bombers in the 2000s. While the YJ-12 is air-launched, the CM-302 export variant can be launched from air, land, or sea platforms and used in a land-attack role.

The YJ-12 poses a number of a number of security concerns for U.S. naval forces in the Pacific and is considered the “most dangerous anti-ship missile China has produced thus far.” [2] The danger posed by the YJ-12 comes from its range of 400 km, making it the longest-ranged ACBM ever engineered, and its ability to travel at high rates of speed (up to Mach 3). This makes it difficult for Aegis Combat Systems and SM-2 surface-to-air missiles that protect U.S. carrier strike groups to identify and engage the missile since it can be launched beyond their engagement ranges, which greatly reduces the U.S. Navy’s time to react. Protection against the YJ-12 is even more difficult due to its cork-screw-like turns which allow it to evade final defenses. With the combination of Chinese Flankers, YJ-12’s can potentially reach up to 1,900km which could cause an even larger problem for the U.S. than China’s DF-21D ASBM. Deployment of the YJ-12 and the development of related ASCMs also demonstrates China’s desire to field anti-access and area denial capabilities in case of future conflict.