What is a Mortar: 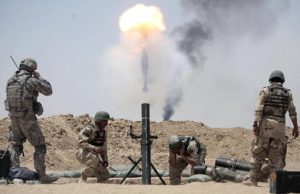 A mortar is a a short, smoothbore gun for firing shells (technically called bombs) at high angles.  Mortars can be dismounted or mounted onto a vehicle.  Dismounted mortars consist of a tube, a bipod, a baseplate, and a sight.  Each mortar round consists of the projectile body, fins, an ignition cartridge, propelling charges, an obturator band, and a fuze.  A mortar’s payload can include High explosives, Smoke, or illumination.  When the projectile is dropped down the tube it strikes a firing pin fixed at the bottom of the tube, the propellant is ignited, and the expounded gases force the round out of the tube at a high speed.  Modern mortar sizes range from 60 MM to 120 MM, with the most common sizes being the 60 MM, the 81 MM, the 82 MM, and the 120 MM.  All mortars are considered short range weapons as the 120 MM mortars only have an approximate range of 7,200 meters.

Advantages to using mortars. Mortars are more practical than artillery in certain situations because they are relatively light, can easily maneuver, and normally are less sophisticated than artillery systems. Some of the larger mortars, the 120 MM for example, can be vehicle mounted.  Mortars are area fire weapons but recently forces have begun to field Accelerated Precision Mortar Initiative (APMI) Rounds, which are precision guided rounds that greatly improve the accuracy and reliability of mortars.

What is a Rocket: 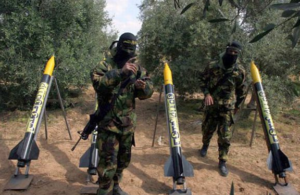 Rockets being prepared to be fired towards Southern Israel.

A rocket is an unguided self-propelled munition.  Rockets are propelled by the rearward expulsion of expanding gases from the nozzle of the motor. Burning a mass of propellant at high pressure inside the motor tube produces the necessary gas forces. Rockets function in an even vacuum. The propellant contains its own oxidizers to provide the necessary oxygen during burning. A Rocket consists of three major components, the motor, the warhead, and a fuze.  Rocket specifications include surface to surface, surface to air, air to air, and air to ground. Rockets also can be fired from a variety of platforms including shoulder fire launchers, vehicle mounted launchers, and Aircraft mounted launchers. 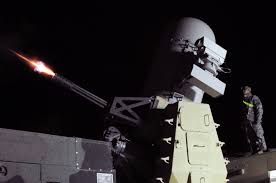 C-RAM system being utilized at night

Systems that are capable of countering mortar and rocket fire are the Counter-Rocket, Artillery, Mortar (C-RAM), The Iron Dome, and directed energy is currently being tested as a means to counter mortar & rocket fire. C-RAM is effectively a land version of weapons such as the Phalanx CIWS radar-controlled rapid-fire gun for close in protection of vessels from missiles. The Iron Dome is a mobile all-weather air defense system designed to intercept and destroy short-range rockets and artillery shells fired from distances of 4 to 70 kilometers.