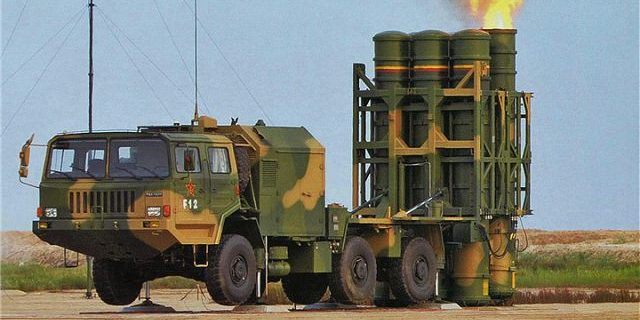 The Hong Qi-16 is a vertical-launch Chinese missile defense system, which most scholars consider to be a reverse-engineered copy of the Russian Buk-M2 aerial defense system. Originally designed to protect Chinese surface ships, the HQ-16 is widely used in China to provide a mid-tier layer of defense against aircraft, UAVs, cruise missiles, and short and medium-range missiles. As opposed to the Russian Buk system, HQ-16 launchers are mounted on Taian TA5350 6×6 high-mobility trucks (compared to Buk tracked chassis), and the radar unit is carried separately on another vehicle.[i]A typical battery comprises of four launch vehicles (with six launch tubes each), a command-and-control unit, two radar units, and a generator.[ii]Further development of the HQ-16 produced the HQ-16B and the nascent HQ-16C, which can reach extended ranges of approximately 70 km thanks to an improved rocket motor and revised wings.[iii]The two radar units in an HQ-16 battery typically consist of one L-band passive phased-array radar (with a range of 85 km) and one S-band 3-D passive phased-array radar (with a range of 140 km), which provides target tracking information.[iv]Together these radar units can detect up to 144 targets and track up to 48simultaneously.[v]HQ-16 interceptors feature semi-active homing and have a reported single-shot kill probability (Pk) of 85 percent against aircraft and 60 percent against cruise missiles.[vi]

For China’s layered air defense, the HQ-16 fills the critical gap between the short-range HQ-7 (15 km) and the long-range HQ-9 (200 km).[vii]Since its initial operational capacity in 2011, the HQ-16 has been widely used to protect military installations and industrial assets, particularly in the Shenyang Military Region in northern China.[viii]With a flight speed exceeding Mach 3, HQ-16 missiles can reliably intercept a variety of aircraft, including most fourth-generation fighters. Moreover, because HQ-16 uses a cold launch system, each unit is relatively inexpensive to produce and operate compared to similar Buk systems. Despite the widespread possession of Buk systems, relatively little is known about the Chinese HQ-16 variants, particularly the HQ-16C, because of their limited public testing records.

2016:The HQ-16B variant is publicly revealed and reported by IHS Jane’s, featuring extended range and improved accuracy. Work begins on the HQ-16C.[x]

2005: China begins development of the HQ-16 system in collaboration with Almaz-Antey.[xii]

1997:Russia completes development of the Buk-M1-2, which is redesignated as the SA-17 Grizzly.[xiii]

1980:The Buk-1 system enters service in the Soviet army.