Japanese involvement in missile defense dates back to the deployment of the Nike-J missile, a conventionally tipped version of the Hercules missile, which was the result of a Memorandum of Understanding that was finalized in 1967.[i] A team from the Japan Defense Agency successfully flight-tested the Nike system in 1970 at McGregor Range in New Mexico. In 1985, Japan signed a license agreement to produce the Patriot PAC-2, a surface-to-air missile to counter airborne threats, and planned to deploy 26 of the missiles over the proceeding decade.[ii]

In the early 1990’s Japanese companies took part in in the U.S. industry Western Pacific Basin Architecture Study, a part of the Strategic Defense Initiative (SDI) that sought to study missile defense in the region. Upon completion of that study in 1994, the United States and Japan initiated a “Bilateral Study on BMD” to study the architectures of what a Japanese missile defense system would look like. In 1996, Japan upgraded to the Patriot PAC-2 (UG), which included software upgrade to be able to intercept ballistic missiles.[iii]

The North Korean test launch of the Taepodong-I missile in August of 1998, which flew over Japanese territory and into the Pacific Ocean, reignited Tokyo’s interest in missile defense.[iv] Soon after, the Japanese Security Council agreed to cooperate with the United States on research for the Navy Theatre Wide (NTW) Defense System. Today, Japan’s primary security concern is North Korea, which possesses numerous medium- and intermediate-range ballistic missiles capable of striking targets throughout the Asia-Pacific region, as well as a progressing nuclear weapons program.

In 2003, Japanese Prime Minister Junichiro Koizumi expressed expanded interest in ballistic-missile defense.[v] This led to Tokyo’s first deployment of both the Patriot Advanced Capability-3 (PAC-3) and Aegis BMD systems in 2007.[vi] Patriot batteries have been deployed around Tokyo and permanently to Okinawa.[vii] The Aegis BMD system was first deployed as an upgrade to Aegis KONGO Class Destroyers. The upgrade included arming the destroyers with SM-3 Block IA missiles. The first intercept test occurred on the JS Kongo (DDG-173) in December 2007, followed by tests of the system on JS Chokai (DDG-176), JS Myoko (DDG-175), and JS Kirishima (DDG-174).[viii] In 2012, Japan upgraded two more Aegis class destroyers, the JS Atago (DDG-177) and JS Ashigara (DDG-178), with BMD capability. 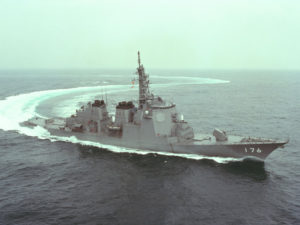 Japan also hosts two U.S. Army Navy/Transportable Radar Surveillance, or AN/TPY-2, radar systems that are deployed in Kyogamisaki and Shariki. The United States has also deployed its own PAC-3 battery and a Ticonderoga-class missile cruiser in Japan since 2006.[ix] The PAC-3 unit was deployed to Kadena Air Force Base in Okinawa in October 2006 after the North Korean nuclear test and subsequent missile launches in July of that year.[x] The U.S. currently deploys six Aegis BMD-capable ships at Yokosuka as part of the Seventh Fleet.

Japan’s missile defense system interconnects the country’s domestically owned and operated missile defense systems and sensors, as well as those hosted from the United States. Numerous radars work to create a detailed air picture above Japan, providing early warning of ballistic missile launches from the DPRK and allowing either Aegis BMD-capable vessels or Patriot PAC-3 systems to intercept missile threats.

In 1999, the U.S. and Japan signed a memorandum of agreement to cooperate to develop the SM-3 Block IIA interceptor, and began the SM-3 Cooperative Development Project with a revised Memorandum of Understanding in 2006.[xi] The interceptor passed Critical Design Review in 2013 and has undergone two flight tests since June 2015. On February 4, 2017, the U.S. and Japan conducted the first successful intercept test of the SM-3 Block IIA.[xii]

The December 2014 Mid-Term Defense Plan ordered the Maritime Self-Defense Force (MSDF) to purchase two new Atago-class guided missile destroyers. These are scheduled to enter the fleet in 2020-21 and will be armed with the SM-3 Block IIA interceptor.

In 2016, the unprecedented and high number of ballistic missile and nuclear tests from North Korea has forced Japan and South Korea–two countries with historical animosities–to increase cooperation in the realm of missile defense. In November 2016, Japan and South Korea signed a landmark intelligence-sharing agreement, authorizing both countries to directly share intelligence on North Korean ballistic missiles; a process that was formerly conducted through the United States.

North Korea’s provocations have also driven Japan to consider acquisition of new missile defense technologies such as THAAD and Aegis Ashore. In November 2016, Japan’s Defense Ministry established a committee studying the impact of “future systems for intercepting ballistic missiles.” In December, Japanese officials plan on visiting the U.S. THAAD battery in Guam to further investigate the missile defense option. In May 2017, Tokyo leaned away from acquisition of THAAD and toward Aegis Ashore, touting Aegis’ larger defensive area coverage and cheaper costs as the reason for the shift in preference.[xiii]

Most recently, Japan’s Prime Minister Shinzo Abe approved the installation of two land-based Aegis Ashore missile defense systems. The government plans to deploy the systems in two places, by 2023 at the earliest, but the locations are undecided.[xiv]

National Defense Program Guidelines for FY 2014 and beyond