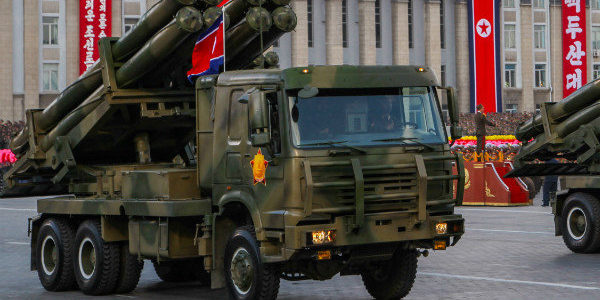 Testing of the KN-09 may have begun as early as 2013 when South Korean press reported a 300 mm rocket was fired into the Sea of Japan.[i] There were several tests of the system in Feburary, March, and June of 2014.[ii] The system was last tested in March 2016. The test was successful and the KN-09 was reported to have flown 200 km. It was officially unveiled in October 2015 during a military parade, but was most recently seen again in the February 2017 “Day of the Sun” parade.

The KN-09 is is a trunk mounted launch system. It has eight rockets stored in two-four rocket pods. The rockets’ caliber is 300 mm. All eight rockets can all be fired within 50-60 seconds. The KN-09 has a reload time between 45 to 60 minutes.

How and from where North Korea acquired this technology is also uncertain. Some analyses indicate that the KN-09 is based on either Russia’s BM-30 Smerch or China’s A-100 MLRS.[iii] It is possible the system is homegrown and developed off of an old 240 mm version. 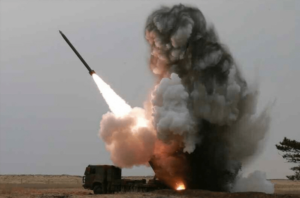 The KN-09 shows considerable upgrades from North Korea’s older generations of MLRS (M1985/1991 – range 40-60 km). The 190 km range is significantly more than its predecessors and even more that Russian and Chinese comparative systems. It brings more South Korean and United States targets, including all of the Seoul, within range of artillery bombardment from the North.[iv] Its satellite navigation guidance capability, if operational, could put American military assets at risk in the early stages of a conflict. Overall, the KN-09’s limited deployment does not drastically alter the strategic balance on the Korean peninsula nor pose a new threat to U.S. assets that were not all ready in range of different DPRK systems.