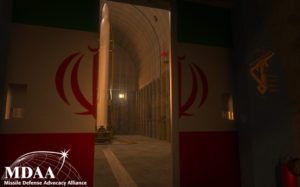 In March of 2016 during the Eqtedar-e Velayat missile exercises, Iran publicly unveiled images to the press of a new underground launch facility. The pictures and videos offered a glimpse of an underground base for Iranian Qiam and Shahab missiles. These subterranean tunnels are designed to conduct missile launch preparation and fueling in an environment which allows for rapid preparation while minimizing detection of activity. This panoramic reconstruction presents a full 360 degree view of the interior of one the launch preparation rooms.