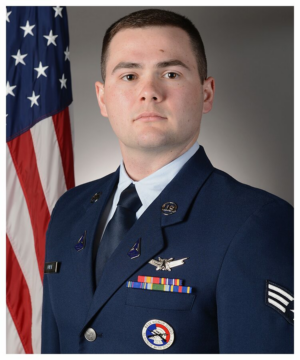 He enlisted into the Air Force on August 6th, 2019, at JBSA-Lackland Air Force Base. He completed Enlisted Undergraduate Space Training (EUST) at the 533rd Training Squadron, Vandenberg Space Force Base. Spc4 was assigned to the 2nd Space Warning Squadron as a Data Systems Operator. In September of 2020, Spc4 Friese transferred to the United States Space Force. In March of 2022, Spc4 Friese was selected to upgrade to the position of Mission Crew Chief as a result of his outstanding performance and dedication to the mission. Spc4 Friese has accumulated over 1,500 operational hours on the Space Based Infrared System as part of the Overhead Persistent Infrared Community.

Spc4 is nominated for the DOY award for the pivotal alert role he played in the USEUCOM support during the Russian attack on Ukraine where he supervised the collection, validation, and reporting of 1,651 missiles and 7,506 infrared events. Throughout the conflict, Spc4 Friese was charged with providing early warning of missile threats to USEUCOM, NATO’s AIRCOM/BMDOC, and forty-three million Ukrainians. His outstanding leadership and performance were key to the unit winning Space Operations Command’s Space Power Discipline Unit of the Year Award for 2021.

Spc4 Friese is an inspiration to the unit as both a missile warning expert and outstanding leader. He led the world’s #1 Missile Warning Unit by reporting 10,724 high priority infrared events and 1,972 missile events to 11 Combatant Commands and 345,000 United States and NATO personnel abroad. Spc4 Friese further highlighted his leadership by managing a 5-man mission cell during the Delta 4 & Delta 7’s Small Force Exercise, his efforts led to the establishment of a new process to integrate the OPIR mission with ground-based early warning radars.