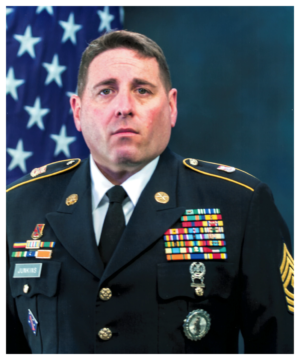 SGM Junkins is the Command Sergeant Major for the 1st Battalion (BN), 265 Air Defense Artillery Regiment (ADAR) in the Florida National Guard (FLARNG). In 2020, he served as the First Sergeant for HHB/1-265 ADAR during their mobilization in the National Capital Region (NCR). SGM Junkins successfully managed the execution of all training and certification events during Exercise America’s Shield (EAS) and the Culminating Training Event (CTE) at Fort Bliss, Texas. His mentorship and guidance reflected in Soldiers’ performance that resulted in 100% of all mobilization tasks being completed with zero loss or damage to equipment or personnel. SGM Junkins is also known to develop and guide other Soldiers from adjacent FLARNG units to include individuals from external organizations. SGM Junkins is revered by many as a leader, expert, and a paragon of the Non-commissioned Officer (NCO) Corps. His dedication and commitment to excellence as a senior NCO within the ADA community as well his service to his unit is second to none. SGM Junkins is of the highest character and a quiet professional, whose dedication to service and commitment to excellence has no equal. SGM Junkins enlisted in to the United States Marine Corps in March of 1990. He served on active duty for five years as a Heavy Machine Gunner and a Field Radio Operator and then in the Marine Corps Reserve until 1998. In 2002, SGM Junkins enlisted into the FLARNG and reclassed as an Avenger Crewman where he was assigned to Bravo Battery, 1-265 ADAR. Over his 19 year career in the FLARNG, SGM Junkins has served as a recruiter, Avenger Section Sergeant, Avenger Master Gunner, and Avenger Platoon Sergeant, Air Defense instructor, Senior Small Group Leader, the National Guard Bureau Air Defense Artillery Subject Matter Expert (SME), and Deputy Commandant of the 211th Regional Training Institute. SGM Junkins’ deployments include Okinawa, Japan, Desert Shield / Desert Storm, two to Somalia, two to the Western Pacific, and two for the NCR – Integrated Air Defense mission in Washington D.C. SGM Junkins is a member of the Honorable Order of St. Barbara. He has a Bachelor’s degree in History from Stetson University in his hometown of DeLand Florida where he resides with is 20 year old son, Robert.