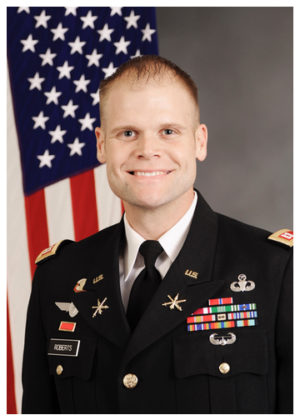 Captain Jason Roberts is a 2004 graduate of Mars Hill College. He attended Graduate School at Appalachian State University where he received his commission into the Air Defense Artillery in 2006. Following his commission, he attended the Basic Officer Leader Course and the Air Defense Officer Basic Course. His first assignment was in Echo Battery, 3-4 ADAR where he served as an Avenger Platoon Leader.

CPT Roberts then assumed duties as the Executive Officer of Delta Battery, 3-4 ADAR and deployed in support of Operation Iraqi Freedom. Upon redeployment and promotion to Captain, Roberts served as the Assistant Operations Officer in 3-4 ADAR and oversaw the PAC-3 fielding and PDB 6.5 New Equipment Training. Additionally, CPT Roberts served as the Battalion Air Officer until he was selected to command Echo Battery.

Upon redeployment, CPT Roberts attended the Marine Expeditionary Warfare School where he was an Honor Graduate. Following his studies at Quantico, CPT Roberts was hand-picked by the Air Defense Commandant to serve as a Captain’s Career Course Instructor. CPT Roberts is the 2015 James A. Shipton Award winner. CPT Roberts is married to the former Mrs. Elizabeth Wood and they have 4 children: Jannah, Brendan, Joseph, Mary.