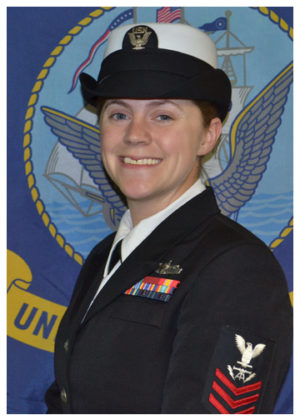 FC1 Clark was born in Vancouver Washington on the 15th of October 1987. She graduated from Deer Park High School in 2006 and enlisted in the United States Navy in March of 2010. After completion of Recruit Training at RTC Great Lakes she attended FC “A” school at NTC Great Lakes and completed FC “C” school December 2011 as an AN/SPY-1D technician. She reported onboard USS Ross DDG-71 January 2, 2012. At ATRC Dahlgren, FC1 received the Navy Marine Corp Achievement Medal for her volunteer work at the on-base Emergency Operations Center during hurricane Irene.

FC1 Clark serves as the lead SPY technician and the lead 2M Technician onboard the USS Ross. For excellence in performing her duties as Lead SPY Technician and Work Center Supervisor for the SPY work center, FC2 was meritoriously advanced to Petty Officer Second Class in January of 2013. She was part of the homeport shift to Rota, Spain and completed two Mediterranean Patrols in support of European Ballistic Missile Defense.

In October 2015, FC1 Clark was the RSC Operator and lead SPY Technician during Ross’ successful completion of At Sea Demonstration 15 that included two Terrier Orion TRACKEXs and the first SM-3 missile engagement outside of a U.S. range. She lives in Rota, Spain with her husband, Zackary Hombel, and their dog, The Dude. In her spare time, she enjoys baking, sewing, and yoga.