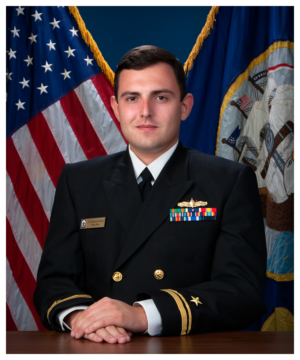 LTJG Anderson then reported to USS Porter in Rota, Spain as the Electrical Officer. While onboard he completed three Ballistic Missile Defense FDNF-E patrols including Fifth and Sixth Fleet Areas of Responsibilities and participated in many multinational exercises, including Dynamic Manta, Joint Warrior, FOST, and Deep Blue.

He completed two BMD FDNF-E patrols, including deployments to the Baltic Sea, Black Sea, and eastern Mediterranean. LTJG Anderson has trained all of the USS Porter’s Tactical Action Officers, provided multiple iterations of BMD training to the Commander’s wardroom, and is the cornerstone for every Sixth Fleet BMD scenario that includes the USS Porter.

Following USS Porter’s Aegis baseline upgrade to 4.1, LTJG Anderson was critical in training the BMD teams on operational differences, which was a critical enabler for USS Porter’s successful BMD Qualification in 2018. LTG Anderson has unparalleled understanding of BMD and the role Aegis BMD plays in the Sixth Fleet AOR and its integration with other assets such as THAAD, Patriot, and Aegis Ashore for the execution of missions. During both Sixth Fleet scenarios and real-world BMD operations, LTJG Anderson provided critical feedback to fleet-level planners, helping to shape new stationing geometries in this AOR.