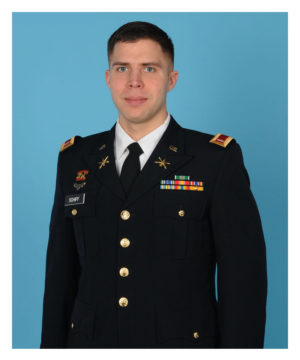 First Lieutenant Benjamin E. Schiff was born in Nephi, UT and grew up in Detroit, MI. In 2008, he enlisted in the United States Army as a 36B, Financial Management Specialist. In 2014, he commissioned as an Air Defense Artillery Officer through the United States Military Academy at West Point.

1LT(P) Schiff’s first assignment beginning his Army officer career was as a Launcher Platoon Leader for Bravo Battery, 5-7 ADA, 10th AAMDC in Kaiserslautern, Germany. Later he was assigned as the Fire Control Platoon Leader for Bravo Battery. In 2016, 1LT(P) Schiff moved to HHB, 5-7 ADA in Baumholder, Germany as a Tactical Director. He is currently serving as the Fire Direction Center Officer in Charge for 5-7 ADA.

He is married to Stephanie Schiff of Warren, MI.