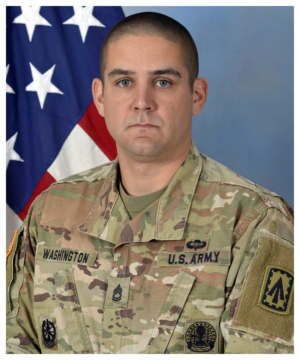 SFC Washington is the First Platoon Sergeant for Bravo Battery, 2nd Battalion, 44th Air Defense Artillery Regiment (ADAR) at Ft. Campbell, Kentucky. In 2020, he deployed to Camp Dahlke, Afghanistan; Camp Taji, Iraq; and the U.S. Embassy Baghdad with Bravo Battery 2-44 ADAR as the C-RAM Platoon Sergeant and Site Noncommissioned Officer in Charge. He created a training program that achieved a 100% “GO” rate for Table VIII certifications across Bravo Battery prior to the unit’s deployment to Afghanistan. There, SFC Washington developed a training and certification program for new counter-unmanned aircraft system (C-UAS) assets deployed to the Area of Responsibility (AOR). Within the first month of the mission, SFC Washington’s platoon was ordered to Camp Taji, Iraq in response to a casualty producing rocket attack. SFC Washington planned and executed the first inter-theater, “no-notice” relocation of C-RAM assets in U.S. Central Command’s history. In Iraq, SFC Washington led a team of over 50 Soldiers and civilian engineers in the hasty emplacement and calibration of C-RAM assets and the team was able to reduce the doctrinal install timeline by sixty percent. SFC Washington and his platoon were once again called upon for an unprecedented mission; to establish indirect fire protection over Baghdad’s International Zone in direct support of the U.S. Diplomatic Mission in Iraq. SFC Washington synchronized efforts across Department of Defense and Department of State entities to calibrate and make ready the C-RAM system. This action represented the first time in history a military grade system such as the C-RAM has been employed at any U.S. embassy. SFC Washington’s innovation, dedication, and decisive leadership produced strategic results for the Air Defense Artillery branch and the United States of America. SFC Washington enlisted in the United States Army in 2006 out of his hometown of Virginia Beach, Virginia. His first duty station was Camp Casey, Korea as an Avenger Crewmember Gunner in 2007. SFC Washington also deployed to Baghdad, Iraq between 2009-2010 with Echo Battery, 3-4 ADAR. He is actively pursuing his Associates Degree at American Military University (AMU). SFC Washington has shared his military experience over the last 14 years with his wife Amber, and their three sons, Jaden, Mason and Wyatt.