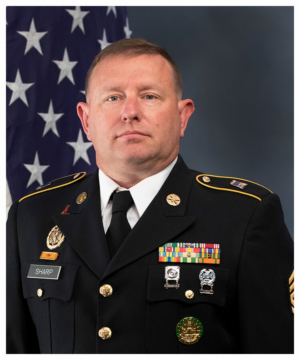 SFC Sharp has mobilized under Operation Enduring Freedom supporting the National Capital Region mission as a Tactical Control Assistant for the National Advanced Surface to Air Missile System (NASAMS) in 2010. Again in 2012 he also mobilized in support of the NCR-IADS mission supporting the Minimum Deployment Package (MDP) who is tasked with supporting the office of the President of the United States.

SFC Sharp is nominated for the DOY award because he has been an integral part to the continued success of 1st Battalion, 211 Regiment as an instructor, course developer, quality assurance NCO, leader, and mentor for the Regional Training Institute (RTI), Florida Army National Guard (FLARNG).

SFC Sharp’s scope of influence is not limited to those in his chain of command. He is known to develop and guide other Soldiers from adjacent FLARNG units to include individuals from external organizations. For all intents and purposes, SFC Patrick Sharp IS a FLARNG ADA SME. His dedication and commitment to excellence as a Non-commissioned Officer within the Air Defense community as well his service to his unit, is second to none. He is of the highest character and a quiet professional whose dedication to service and commitment to excellence has no equal.