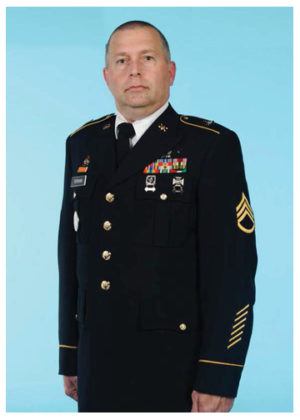 SSG Perkins was selected as the 2014 Missile Defender of the Year for the U.S. National Guard.

SSG Perkins’s initial enlistment was December 3, 1986. After graduating from Basic
Training and Advance Individual Training, SSG Perkins was stationed at Fort Riley, KS
where he served for over three years as a Track Vehicle Mechanic with B Btry 201st
Support Battalion (1987-1990). SSG Perkins was recalled to active duty in support of
Operation Desert Shield/Storm, where he served as a Track Vehicle Mechanic in support of
the initial issue of vehicles to units in preparation for the ground war. SSG Perkins enlisted
in the Florida Army Reserves with the 841st Engineer Battalion, Orlando, FL as a Wheeled
Vehicle Mechanic (2001-2004) after the Sept 11th attack. In March 2003 his unit was
activated for Operation Iraqi Freedom.

SSG Perkins then completed a transition from the FL Army Reserve to the FL National
Guard where he served initially as a Wheeled Vehicle Mechanic for the 3/116th F.A
(MLRS), Avon Park, FL (2004-2008). SSG Perkins then transitioned from Florida State
Technician to the Alaska National Guard with the 49th GMD BN where he served as a Fire
Direction Center (FDC) Communications Operator (2009-2012). He also became dual
certified while working on the GMD System as an FDC Weapons Operator, enabling him to
work in dual roles as well as to train new personnel to the program. He then transitioned
from the Alaska AGR Program to Detachment 1, 100th Missile Defense at Vandenberg
AFB, CA. SSG Perkins was brought on as a Ground Safing Device (GSD) Operator and
continues to serve in several positions within the Detachment such as: Command Launch
Equipment (CLE) Operator, ADMIN NCO, Training NCO, Family Readiness Group (FRG)
Leader, Hazmat Materials Certifier and has also served as the acting Detachment NCOIC in
the absence of the Detachment First Sergeant.