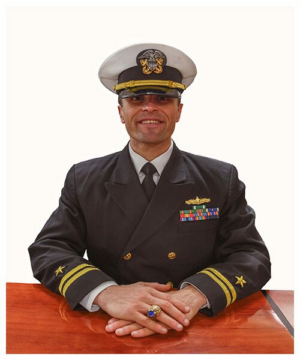 Following his commission, he reported to USS THE SULLIVANS (DDG 68), home-ported in Mayport, FL in May of 2018. He served as the Combat Electronics Officer from May 2018 to July 2020 where he completed one deployment and earned his Surface Warfare Officer Qualification. He was asked to fleet up as the Fire Control Officer in THE SULLIVANS and reported in December 2020, where he completed three challenging and dynamic deployments to FIFTH, SIXTH and SEVENTH Fleets, while also qualifying as Anti – Air Warfare Coordinator, Ballistic Missile Defense Officer and Tactical Action Officer.

LT Cassese is nominated for the DOY award because he has conducted himself above and beyond all expectations in tactics, qualifications, and leadership. While onboard The Sullivans, he developed and prepared the ship’s combat team for their operational deployments through Sixth and Fifth Fleet to include executing 38 IAMD scenarios, as well as the development, testing, and executing of combat system doctrine covering threats spanning two Fleet’s areas of responsibility. His aggressive control and pursuit of casualty repairs ensured THE SULLIVANS maintained a peak performing Aegis Suite and was ready to answer each and every call.

LT Cassese has personally pushed himself to achieve the highest qualifications and was the only Division Officer onboard The Sullivans to achieve a Tactical Action Officer designation letter in addition to his other advanced qualifications as Anti-Air Warfare Coordinator and Ballistic Missile Defense Officer. His energetic and inspirational leadership has guided his division through seven advancements and eight Combat Systems Officer of the Watch and Combat System Coordinator qualifications. After the successful completion of the ship’s deployment, LT Cassese volunteered to support Commander, Carrier Strike Group Four as an IAMD assessor. His actions directly led to the successful deployment certification of the USS Farragut. His commitment to excellence and dedication highlights the tactical acumen that is the core of our Fleet Today.