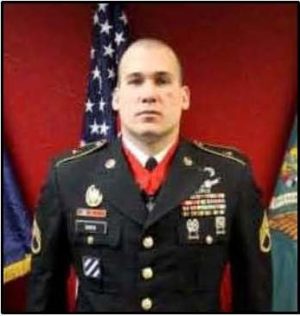 An Army Drill Sergeant’s son who has worked his way through Iraq and Afghanistan, patrolled sub 50-degree temperatures on our missile site in Alaska, and is now one of, if not the best fire control officer presiding over 26 Ground Based Interceptors protecting the United States Homeland 24/7, 365 days of the year.

A native of Sullivan, Illinois, SSG Craig Davis has truly distinguished himself as a critical contributor to the defense of the Homeland from ballistic missile attack.  SSG Davis began as a Military Policeman serving at Fort Greely, AK in Alpha Company, 49th Missile Defense Battalion securing critical assets.  SSG Davis served as both a team and squad leader within Alpha Company and significantly contributed to both the successful execution of the site defense mission and the professional development of soldiers assigned to him.

SSG Davis attended and graduated from the GMD Operator course in 2008 and began a transition from Military Police to becoming an Air and Missile Defender.  SSG Davis was assigned as a Fire Direction Center as a Weapons Operator.  He is responsible for training numerous crewmembers in preparation for demanding individual and crew evaluations.  SSG Davis and his crew have maintained an average evaluation score of 98%, on both written and practical certification evaluations.  His dedication and expertise was recognized when he was made the Non-Commissioned Officer in Charge (NCOIC) of the Fire Direction Center.