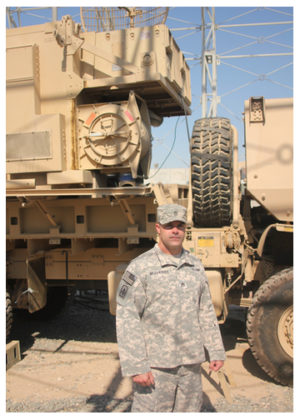 SSG McSherry was selected as the 2014 Missile Defender of the Year for the U.S. Army.

SSG McSherry is a subject matter expert for nearly every aspect of Patriot Air and Missile
Defense. His in-depth knowledge of launchers, up-range operations, and system
maintenance has been invaluable to the success of his unit. McSherry has certified on every
piece of equipment at the battery level and is qualified to evaluate the crews for the
Battalion EMMO Team. He helped complete, develop, and refine the unit’s maintenance
SOP which was commended as the most in-depth and complete SOP in theater by Brigade
Evaluators.

SSG McSherry served with distinction as the Sergeant of the Guard and Patriot Master
Gunner for the first Multi-National Live Fire Exercise ever conducted in his deployed
location. He established the Patriot Site, emplaced equipment, and established security
that enabled the high-profile exercise to be an overwhelming success between the two
countries. He assisted his host nation partners with the set-up of their equipment and
helped them overcome numerous equipment challenges during the exercise. His host
nation counterparts commended his professionalism and knowledge of Patriot operations.
McSherry was also chosen to represent the 3-4 Air Defense Artillery Regiment for the
prestigious James A. Shipton Award. The Shipton award was named for Brig. Gen. James
A. Shipton, who is acknowledged as the founding father of the Air Defense Artillery (ADA)
branch.

The Shipton Award is presented to an individual “judged superior to their peers
based on the criterion of leadership, tactical and technical proficiency, selfless and
community service, and commitment to excellence. The recipient’s performance, military
bearing, innovation and dedication must have resulted in significant contributions to or
enhanced ADA’s warfighting capabilities, morale, readiness and/or maintenance.”
McSherry was nominated by his battery and endorsed by his battalion commander as the
epitome of a great Non-Commissioned Officer for his leadership qualities, commitment to
excellence, and innovative drive.

SSG McSherry’s noteworthy performance in myriad of areas sets him apart from his peers,
instills confidence in his subordinates, and merits the highest praise from his superiors.