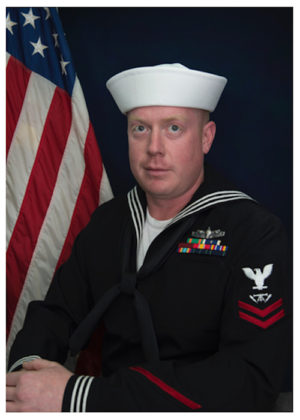 FC2 Ringer was selected as the 2014 Missile Defender of the Year for the U.S. Navy.

Bartholomew Ringer graduated from Parkway North High School in West County, St.
Louis, MO in 1999. He attended the University of Evansville, IN and the University of
Missouri before pursuing a career in the U.S. Navy. In 2010 he enlisted in the Navy and
attended boot camp and FC “A” School in Great Lakes, IL.

FC2 Bartholomew Ringer’s quality of work, leadership, and tactical acumen define the
standard of excellence for the Navy’s finest warship’s Aegis Combat System suite. He is an
unparalleled technical and tactical expert. Ringer’s noteworthy accomplishments over the
last year make him extraordinarily worthy of recognition.

Ringer Maintained Donald Cook’s SPY radar at 100% mission readiness throughout the
ships patrol, leading to the expeditions repair of 11 major SPY casualties. His overall efforts
resulted in an unprecedented five months on the SPY honor roll.