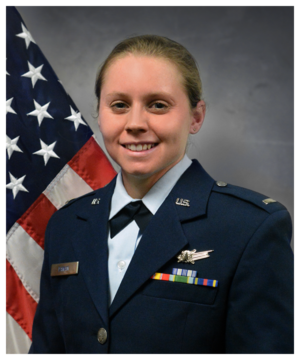 1st Lt Daman is a Mission Commander with the 2d Space Warning Squadron, Space Delta 4, Buckley Garrison, in Aurora, Colorado. As Mission Commander, she operates and presides over 14 enlisted and officer personnel as part of America’s Premier Missile Warning entity, providing first alert and early warning indications to over 345,000 military, civilian, and allied forces across the globe. Lt Daman played a pivotal alert role in the Iranian Strike against two U.S. based in Iraq on January 7, 2020. As leader of a 15-person team, she worked with four missile warning agencies and created five critical mission plans for eight enemy threat platforms in anticipation of a catastrophic attack on U.S. and Allied forces. Lt Daman’s accuracy, attention to detail, and leadership during the crisis allowed her crew to provide first indications to 5,000 coalition members in the U.S. Central Command (USCENTCOM), leading to zero casualties. Her heroic efforts not only earned the crew a group-level award, but also personal kudos and thanks from USCENTCOM Combined Forces Air Component Commander, Chief of Space Operations, Secretary of the Air Force, and even the President of the United States. Additionally, Lt Daman volunteered to lead a 9-member, 30-day sequester operation to ensure vital missile defense support throughout the entirety of the COVID-19 pandemic. During the sequester she was able to operate 300 error-free survival mission hours, and identify and report 23 infrared events. This tremendous execution fulfilled both the Wing Commander’s and Secretary of Defense’s top missile warning priority. Furthermore, Lt Daman created 15 mission plans for 50 new missile profiles, optimizing tactics on eleven satellites for U.S. Space Command. Lt Daman was born and raised in Dewitt, Michigan where she excelled as an athlete and scholar throughout her life. She earned her commission from the Virginia Military Institute in 2018 where she majored in Physics. She is currently pursuing a Master of Science Degree in Exercise Science from Liberty University. Lt Daman has accumulated over 2,000 operational hours on the Space Based Infrared System as part of the Overhead Persistent Infrared Community. She is a certified line tactician and has also earned an Air Force Achievement Medal for her work with the Wing Command Action Group during the COVID-19 global pandemic.