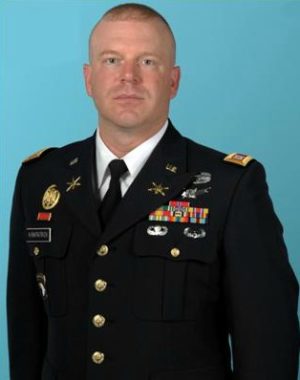 Captain Kyle L. Kirkpatrick was born in Longview, Washington. He graduated with a Bachelor of Science Degree in University Studies from Brigham Young University-Idaho. In 2000, Kyle enlisted in the Idaho National Guard as a Cannoneer (13B) and went to Basic Training and Advanced Individual Training at Fort Sill, OK. CPT Kirkpatrick was among the first of three to commission as Second Lieutenants from BYU-I in the United States Army where he was selected to the Air Defense Artillery Branch.