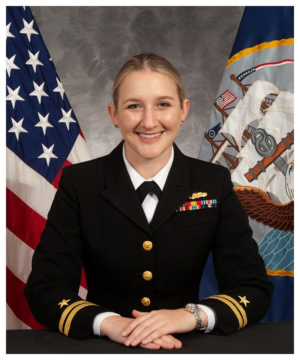 LT Ringwall is the Fire Control Officer for the USS Howard (DDG-83), homeport at Yokosuka, Japan. Upon LT Ringwall’s arrival, the USS Howard was completing a modernization upgrade after being fitted with Baseline 9.C.2. LT Ringwall built the USS Howard’s Ballistic Missile Defense (BMD) program from the ground up. She trained her ship’s combat team throughout the entirety of Basic, Integrated, and Advanced phases in Air Warfare, BMD, and Surface Warfare. LT Ringwall also led the USS Howard’s combat team during 80 scenarios, 20 of which she developed herself within the training program and prepared the combat team so well they earned rare T1 scores in three different BMD assessments. In 2021, LT Ringwall spearheaded the Missile Defense Agency’s At Sea Demo-01, where USS Howard was the first ever Aegis ship to track single and simultaneous Resident Space Objects base on Space Command and Communications directed tasking. LT Ringwall worked directly with the Space Force while simultaneously creating the Navy’s first Special Access Protocol at Sea program to support the mission. LT Ringwall also led the USS Howard’s combat team in two BMD Readiness Exercises, coordinating between Japanese, American, and South Korean forces. Her efforts led to the successful testing of the communications and link structure needed to jointly defend the homeland. LT Ringwall’s 17 Sailors in Combat Fire Control division have taken her drive and multiplied it as technicians. Not once over the past two years has SPY, Fire Control System, or Aegis been down for more than a couple of hours. LT Ringwall hails from Milton, Georgia, is a graduate of the University of Notre Dame, and commissioned through the Notre Dame Naval ROTC program. As a student, she majored in Science-Business and was involved in Student Government. She is fluent in Spanish and studied for six months in Santiago, Chile. Upon commissioning, LT Ringwall reported to the USS Howard in San Diego, California and deployed to Fifth Fleet with Carrier Strike Group 11 as the ship’s Main Propulsion Officer. Between tours, LT Ringwall was the youngest-ever graduate (23) of the Integrated Air and Missile Defense Warfare Tactics Instructor course and earned the course’s “Top Tactician” award. LT Ringwall then earned the Honor Graduate distinction at the Advanced Division Officer Course.