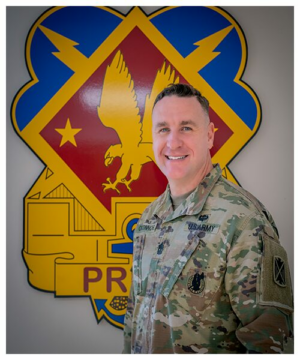 1SG John M. O’Connor enlisted in the United States Army on 19 March 2002 where he was awarded the MOS of 14S Avenger Crew Member (later become the MOS 14P). His first duty assignment was with D/3-4 ADAR, 82ND ABN DIV; Fort Bragg, NC., where he deployed in support of Operation Iraqi Freedom, Iraq. Upon return from deployment, he was assigned to Stinger PLT, CSC, 173rd ABN BDE; Vicenza, IT., where he deployed in support of Operation Enduring Freedom III (Combined Joint Task Force Bayonet); in Afghanistan. His next duty assignment was with A/5-5 ADAR, 11th ADA BDE; Fort Lewis (JBLM), WA, as a C-RAM Crewmember, and deployed to Iraq (OIF/OND). Upon return to JBLM, he was selected to assist with the creation of the Army’s first C-RAM School with D/2-6 ADAR, 6TH Air Defense Brigade, Fort Sill, OK.

1SG O’Connor was assigned as a Platoon Sergeant with C/2-44 ADAR, 108th ADA BDE; Fort Campbell, KY., where he revived the battalions Avenger Program by conducting JRTC rotations. He was later selected for promotion to Master Sergeant in 2019 and was assigned as the First Sergeant for the 13th Missile Defense Battery, 10TH AAMDC, in Israel. After a successful year of uninterrupted operations, he served as the First Sergeant for A/5-4 ADAR; 10TH AAMDC, Ansbach DE.

1SG O’Connor is nominated for DOY award because he exemplifies servant leadership. He also made it his mission to increase the cohesiveness and morale of the headquarters, spearheading several initiatives to bring leaders and Soldiers together outside the work setting. He serves his subordinates as a standard bearer. His battery was the most well trained SHORAD unit in the EUCOM Theater, expertly performing in several Avenger Exercises, M-SHORAD fielding and training, and rapid deployment to NATO’s eastern flank. 1SG O’Connor served his superiors by always accomplishing the mission. He remained a consummate professional, able to speak eloquently to senior leaders in order to influence the decision-making process. As 10th AAMDC, HHB First Sergeant, 1st Sergeant O’Connor served an abundance of field grade officers and continued to maintain standards and discipline within his ranks.