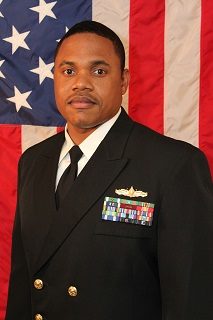 Lieutenant Brandon Bridges was born in Whitesburg, GA. He attended Central High School and graduated in May 1996. He entered the United States Navy on July 15th, 1996 and completed Recruit Training Great Lakes, IL in September 1996.

After completing Boot Camp, he reported to Fire Controlman “A” school where he graduated with distinction and was promoted to Third Class Petty Officer. Upon completion of “A” school, he reported to AEGIS Display Technician “C” school in Dahlgren, VA. After completion of “C” school, he reported to USS ARLEIGH BURKE DDG-51 in January 1998. Following completion of his tour onboard USS ARLEIGH BURKE he was assigned to Instructor Duty at ATRC Dahlgren, VA. Following this tour he was promoted to FCC and assigned to USS GONZALEZ where he was selected to be commissioned as a Limited Duty Officer (LDO). ENS Bridges was assigned to USS LABOON as the ship’s System Test Officer where he supervised the ship’s Ballistic Missile Defense installation and deployed with her on their maiden BMD deployment.

LT Brandon Bridges has been assigned to USS MAHAN (DDG 72) as the Ballistic Missile Defense Officer (BMDO) and Systems Test Officer (STO). He was previously assigned to and deployed on USS LABOON as the BMDO and STO. LT Bridges has twice deployed in each of these ships between 2012 and 2013. He has been forward in the East Mediterranean executing the President’s European Phased Adaptive Approach mission more than any other at-sea Officer.

His personal decorations include the Navy Commendation Medal (two awards) and the Navy and Marine Corps Achievement Medal (six awards).