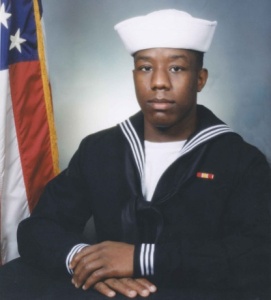 A hero that sacrificed his life for the freedom of others and the bond and love he had for them.

A true American hero whose life will be forever missed in immortality on the greatness this young man has in his soul, heart and mind that would have given back to no end to his family, his shipmates, his community and his country throughout his life.

He will be forever missed as his sacrifice will stand forever.

His actions of the ultimate sacrifice says more than any words could ever do.

God Bless him, his family, his friends and his shipmates on the USS Mahan that he loved and protected.

“Petty Officer Mayo’s actions on Monday evening were nothing less than heroic. He selflessly gave his own life to ensure the safety of the Sailors on board USS Mahan (DDG 72).

The events of last Monday evening are under investigation but it is known at approximately 11:20 p.m. there was a shooting on board Mahan at Pier 1. The suspect approached the Mahan’s quarterdeck and was confronted by the ship’s petty officer of the watch. A struggle occurred and the suspect was able to disarm the Sailor. Petty Officer Mayo, serving as the chief-of-the-guard, rendered assistance after seeing the suspect board the ship. Mayo put himself between the gunman and the petty officer of the watch and as a result was fatally wounded.”