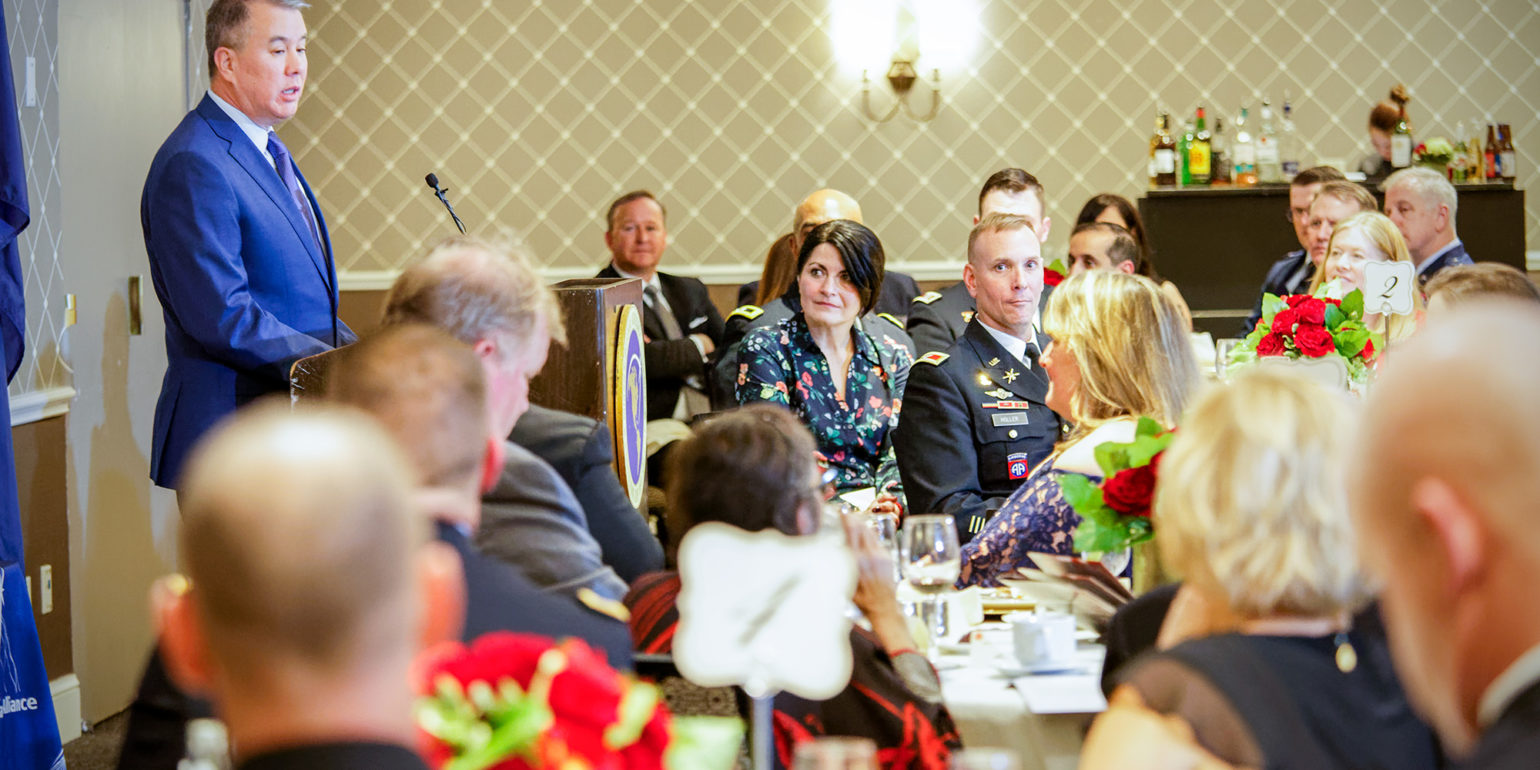 John Rood, former Under Secretary of Defense for Policy, speaking at MDAA's 2019 Missile Defender of the Year Award Ceremony on January 10, 2020.

Board of Directors Member Since April 2020

John Rood has over 30 years of experience in national security positions in the U.S. Government and the private sector in international business and aerospace and defense. He served as a senior official at the Defense Department, State Department, White House/National Security Council, Central Intelligence Agency (CIA), in Congress as a staffer in the U.S. Senate, and as an executive at Lockheed Martin and Raytheon.

Mr. Rood is the Chairman of Board, CEO, and President of Momentus, a space company offering services such as transportation of small satellites and hosted payloads. Mr. Rood also serves as Chairman of the Board and Security Director of Radisson Hospitality, Inc. and on the Board of Directors of Hitachi Ventara Federal.

He managed a team of over 2,100 civilians and military service members and was responsible for building partnerships and defense cooperation with U.S. allies, including overseeing the $55B foreign military sales program and export controls.

Mr. Rood managed implementation of strategies, including the National Defense Strategy resulting in a new focus on addressing the implications of growing competition among the world’s great powers. He oversaw development of a new cyber strategy, authorities, and approach; a space strategy for the newly-established Space Force; completion of the Missile Defense Review; Nuclear Posture Review; and a counter-terrorism strategy for the defeat of ISIS.

Prior to serving as Under Secretary of Defense for Policy, Mr. Rood worked for nearly a decade in the private sector. From March 2016 to January 2018, he was Senior Vice President of Lockheed Martin International charged with leading business growth and industrial partnerships in more than 70 countries. He also served as Vice President for Corporate Domestic Business Development at Lockheed Martin.

Prior to joining Lockheed Martin, Mr. Rood was Vice President for U.S. Business Development at Raytheon from 2009 to 2014, where he managed teams in Washington, DC and 28 field offices responsible for growing the business, preparing market assessments, and managing customer relationships.

From 2007 to 2009, Mr. Rood served at the State Department as Acting Under Secretary for Arms Control and International Security. He was responsible for policy on countering the proliferation of weapons of mass destruction and missiles, arms control, nuclear weapons, security cooperation with other nations, and export controls. He also served as Assistant Secretary of State for International Security and Nonproliferation.

In two tours at the White House/National Security Council from 2005 to 2006 and 2001 to 2003, he served under President George W. Bush as Special Assistant to the President and Senior Director for Counter-proliferation Strategy, and Director for Proliferation Strategy, Counterproliferation, and Homeland Defense. He played a key role in the President’s decision to deploy missile defenses to protect the United States and to withdraw from the 1972 ABM Treaty.

From 2003 to 2005, Rood served as Deputy Assistant Secretary of Defense for Forces Policy, where he was responsible for the development and oversight of policy and programs related to U.S. nuclear and conventional strategic forces, missile defenses, and space systems.

Earlier in his career, Mr. Rood worked as Senior Policy Advisor to Senator Jon Kyl of Arizona and as a Fellow for Senator Thad Cochran of Mississippi on the Senate Governmental Affairs Subcommittee on International Security. From 1988 to 1999, Rood served in a variety of positions as an analyst at the CIA, including following missile programs in foreign countries.

Mr. Rood holds a Bachelor of Science in Economics from Arizona State University.