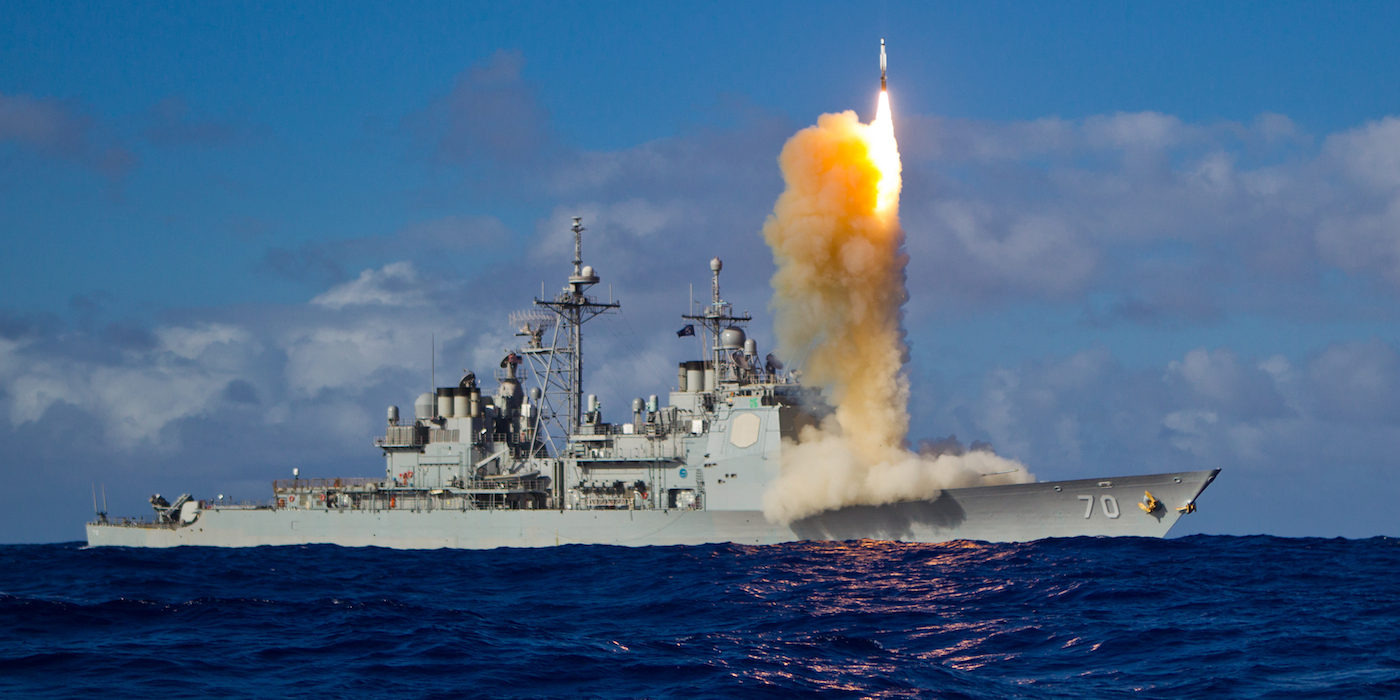 Software  – Aegis BMD systems are programmed with highly sophisticated software to help identify, track, target, and intercept missile threats. This advanced software has resulted in a very successful test record—85% intercept success rate—and has established Aegis BMD as one of the most successful missile defense systems employed by the United States. Over time, Aegis BMD software has been incrementally modernized and improved. Software version 3.6 is the earliest form of Aegis BMD software that is still employed and is used by 15 deployed Aegis vessels. Aegis BMD 3.6 configuration allowed for Long Range Surveillance and Track (LRS&T) of ICBMs and intercept—using SM-3 Block IA interceptors—of short- to intermediate-range ballistic missiles in the midcourse and terminal phases. Aegis BMD 4.0 is the second generation of Aegis BMD software and—in accordance with the SM-3 Block IB—allows for the engagement of increasingly longer range and more sophisticated ballistic missiles. 11 deployed Aegis BMD vessels are equipped with the 4.0 software.

Aegis BMD 5.0 is the most modern software upgrade and increases the sea-based BMD force structure. The capability of Aegis BMD 5.0 was improved significantly by software upgrade Baseline 9, which integrates Aegis BMD vessels with other missile defense sensors and systems and allows them to engage cruise and ballistic missiles simultaneously. Baseline 9 was first tested in November 2014, when the guided-missile destroyer USS John Paul Jones (DDG 53) successfully intercepted a short-range ballistic missile and two cruise missiles. Around 11 deployed Aegis BMD vessels are equipped with upgraded Aegis 5.0 Baseline 9 software. The Aegis BMD 5.1 was certified by the U.S. Navy in September 2018 and will integrate the SM-3 Block IIA interceptor into the combat system to defeat longer-range ballistic missiles and allow the capability to engage on remote.

Regional Defense –Aegis BMD Engagement Capability – Aegis BMD defeats short- to intermediate-range, unitary and separating, midcourse-phase, ballistic missile threats with the Standard Missile-3 (SM-3), as well as short-range ballistic missiles in the terminal phase with the SM-2. Fleet warships conduct flight tests for Aegis BMD and each test increases the operational realism and complexity of targets and scenarios. Aegis BMD-capable vessels are deployed to Europe, Asia, and the Middle East to provide regional missile defense. In Europe, the sea-based Aegis BMD and the land-based Aegis Ashore provide regional missile defense as mandated by the EPAA. Phase I of the EPAA called for deployment of Aegis BMD ships and land-based radar in Europe by the end of 2011. The first phase mandated that four Aegis ships be anchored in Rota, Spain. From there, these vessels deploy throughout the Mediterranean and Persian Gulf to protect southern Europe from ballistic missile attacks coming out of the Middle East. Phase II (2016) and III (planned 2020) of the EPAA mandate interceptor improvements for Aegis-capable ships in Europe and the development of Aegis Ashore sites in Romania and Poland.

International cooperation –Aegis BMD is the first missile defense capability produced by the MDA to be purchased by a military ally, Japan, which deploys four KONGO Class and one ATAGO Class Destroyers that are equipped with Aegis BMD capabilities. In addition, Spain, South Korea, and Australia either operate, are building, or plan to build Aegis BMD ships.

Deployment – As of October 2018, there are 40 deployed Aegis BMD combatants (5 cruisers [CGs] and 35 destroyers [DDGs]) in the U.S. Navy; the Navy has 40 BMD capable Aegis ships however two destroyers have yet to be commissioned. Of the 40 ships, 21 are assigned to the Pacific Fleet and 19 to the Atlantic Fleet. In response to the increasing demand for Aegis BMD capability from the Combatant Commanders, the MDA and Navy are working together to increase the number of Aegis BMD capable ships. Such efforts consist of upgrading Aegis DDGs to the BMD capability, incorporating Aegis BMD into the Aegis Modernization Program, and new construction of Aegis BMD DDGs. As mandated by the EPAA, Aegis BMD vessels have been deployed to Europe, the Mediterranean, and the Persian Gulf since 2011.[ii]

Europe – The developing ballistic missile programs of nations like Iran pose a threat to the European allies of the United States. To counter this emerging threat, the Obama Administration announced the EPAA, which called for an improved missile defense capability in Europe to counter any short- to intermediate-range ballistic missile threats coming from the Middle East. The EPAA mandates the deployment of sea- and land-based Aegis BMD systems to protect Europe from ballistic missile attack and assures our European allies of U.S. commitment to their security. This commitment is becoming increasingly important as nations like Iran continue to improve their ballistic missile capabilities and develop weapons that can strike U.S. partners and allies in Europe.

Asia – The nuclear and ballistic missile capabilities of North Korea and China pose a threat to U.S. allies in the Asia-Pacific region. U.S. allies most threatened are South Korea and Japan. To strengthen cooperation with these allies and appease their security concerns, the U.S. has deployed seven Aegis-capable vessels to Japan and three to Hawaii, with an additional ten in San Diego. These Aegis BMD vessels not only defend against a potential ballistic missile attack, but also strengthen the deterrence capability of U.S. allies in the region. Japan’s seven Destroyers also bolster the deterrence capabilities of U.S. allies in Asia.

June 22, 2017: The USS John Paul Jones (DDG 53) unsuccessfully conducted an intercept test using the SM-3 Block IIA interceptor, which is cooperatively developed by the United States and Japan. A medium-range ballistic missile target was launched from the Pacific Missile Range Facility at Kauai, Hawaii. The USS John Paul Jones detected and tracked the missile target with its onboard AN/SPY-1 radar and Aegis Baseline 9 C2 weapon system. The ship launched an SM-3 Block IIA missile, but the missile did not intercept the target.

February 3, 2017: The USS John Paul Jones (DDG 53) successfully conducted an intercept test using the SM-3 Block IIA interceptor, which is cooperatively developed by the United States and Japan. The test, which occurred in the Pacific Ocean near Hawaii, marked the first successful intercept test using the SM-3 Block IIA. Intercepted during the test was a medium-range ballistic missile target, which fired from the Pacific Missile Range Facility in Kauai, Hawaii.

August 2016: Aegis fleet in the U.S., Japan, and the Republic of Korea are bringing Integrated Air and Missile Defense (IAMD) capabilities to new Destroyers. The ships will be equipped with the latest Aegis system, Baseline 9, which is capable of IAMD. Japan will add two more Aegis capable ships to their fleet. South Korea will add 3 KDX-III Destroyers equipped with Aegis.

May 2016: The USS JOHN PAUL JONES used Aegis Baseline 9 terminal engagement capability to detect and track a medium range ballistic missile (MRBM) target. This exercise marked the first demonstration of Aegis’s ability to conduct a complicated tracking exercise against a MRBM during its endo phase of flight.

October 2015: The U.S. Navy and eight other countries successfully conducted a detect-to-engage integrated air and missile defense exercise in the North Sea, during which the coalition simultaneously intercepted a ballistic missile in space and an anti-ship cruise missile target. This was the first missile defense test of its kind in Europe.

August 2015: The MDA, U.S. Pacific Command, and U.S. Navy successfully conducted a series of four flight test events at Kauai, Hawaii demonstrating successful intercepts of short-range ballistic missiles and cruise missiles with SM-6 Dual I and SM-2 Block IV interceptors. This was the first live fire event of the SM-6 Dual I missile.

July 2013: FTG-07 used Aegis BMD to identify and track a ballistic missile target that was intercepted by the GMD system. The Ground-Based Interceptor was fired based on tracking data supplied by the USS LAKE ERIE (CG 70), the first use of an Aegis BMD ship as a launch-on-sensor in a Ground-based Midcourse Defense test.[iii]

May 2012: Flight Test Mission 16 Event 2a was conducted. This flight test was the first successful live fire intercept test of the second generation Aegis BMD Weapon System, BMD 4.0.1, and the SM-3 Block IB missile. In May 2012, the USS LAKE ERIE (CG 70) successfully intercepted a short-range ballistic missile target over the Pacific Ocean. Aegis BMD 4.0.1 and the SM-3 Block IB missile enable the engagement of increasingly longer range and more sophisticated ballistic missiles. This was Aegis BMD’s 22nd successful intercept out of 27 missile firings against various targets.[iv]

October 2011: The U.S., Spain, and NATO jointly announced that the U.S. would forward-deploy four Aegis-capable ships to Rota, Spain as part of the EPAA. These Aegis ships anchored in Rota, Spain deploy throughout the Mediterranean to protect southern Europe against short- and medium-range ballistic missiles coming out of the Middle East.

April 2011: The MDA, U.S. Navy, and U.S. Army conducted a successful intercept of an intermediate-range ballistic missile using an SM-3 Block IA interceptor over the Pacific Ocean. Aegis BMD launched an SM-3 Block IA missile using track data from the AN/TPY-2 radar that was passed through the Command and Control Battle Management and Communication system to intercept an IRBM target to demonstrate the EPAA Phase 1 capability. This firing was the first Launch on Remote (LOR) Aegis BMD engagement and intercept of an IRBM. The firing was also outside the original design specifications for the SM-3 Block IA missile.[v]

March 2011: During Flight Test Mission 16, Event 1, the USS LAKE ERIE successfully tracked a ballistic missile target. In addition to the BMD mission, the LAKE ERIE also validated the ship’s Anti-Air Warfare (AAW) capability by destroying an incoming anti-ship cruise missile target with an SM-2 Block III missile in a live firing exercise. This was the first event in which a ship used BMD 4.0.1 Weapon System to engage an AAW threat.[vi]

September 2009: Obama announced the EPAA, canceling a Bush Administration plan to place a third Ground-based Midcourse Defense (GMD) system in Poland. The EPAA focused on short- to intermediate-range threats originating from the Middle East and called for sea- and land-based Aegis BMD systems to be deployed incrementally throughout Europe from 2011 to 2018.

February 2008: A BMD-capable Aegis cruiser deployed northwest of Hawaii shot down an inoperable U.S. surveillance satellite that was in a deteriorating orbit.[viii]