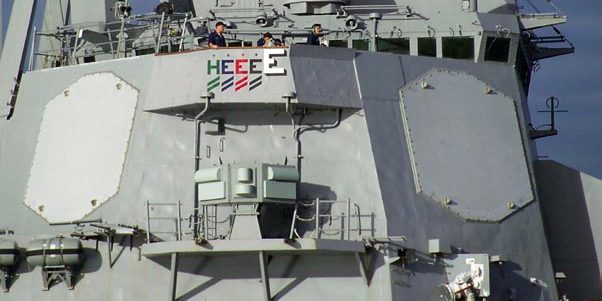 Army/Navy Joint Electronics Type Designation System/AN/SPY-1 Radar is critical for the U.S. Navy’s aerial radar infrastructure and is a key component of Aegis Ballistic Missile Defense System at sea and on land. U.S. Navy cruisers and destroyers employ SPY-1—in addition to a number of foreign vessels—for Aegis Sea-Based BMD, while on land, the radar system is utilized by Aegis Ashore missile defense sites. Developed by Lockheed Martin, SPY-1 radar was originally designed as an air defense system, but has been upgraded to include a ballistic missile defense (BMD) capability. SPY-1’s passive electronic scanning system is computer controlled, using four complementary antennas in order to provide full 360 degree coverage. It operates in S-band and is a multi-function phased-array radar capable of search, automatic detection, transition to track, tracking of air and surface targets, and missile engagement support.

The SPY-1 can maintain continuous radar surveillance while automatically tracking more than 100 targets at one time. Public numerical figures on the SPY-1 detection range claim that it can detect a golf ball-sized target at ranges in excess of 165 km. When applied to a ballistic missile-sized target, the SPY-1 radar is estimated to have a range of 310 km. The system is designed for blue water and littoral operations however SPY-1 configuration must be modified to look above the terrain to avoid causing excessive false targets from land clutter. Configuration changes to mitigate this technical issue have made it more difficult for AN/SPY-1 to identify and track low and fast targets.

Regional Defense—Engagement Capability Aegis BMD systems are capable of detecting, tracking, targeting, and intercepting cruise and ballistic missile targets. After detecting and identifying a regional missile threat, Aegis BMD can engage and intercept the target using Standard Missile variants guided by tracking information provided by SPY-1. Aegis BMD-equipped cruisers and destroyers are being equipped with the capability to intercept short- and medium-range ballistic missiles as quickly as 10 seconds after the radar “sees” the missile’s movement.

Deployment Variants of the AN/SPY-1 radar are employed by all Aegis BMD systems, both on land—with Aegis Ashore—and at sea—on Ticonderoga (CG-47) Class Aegis Cruisers and Arleigh Burke (DDG-51) Class Aegis Destroyers. As of December 2018, there are 38 Aegis BMD-capable combatants in the U.S. Navy, 5 cruisers (CGs) and 33 destroyers (DDGs). Of the 38 ships, 20 are assigned to the Pacific Fleet and 18 to the Atlantic Fleet. U.S. allies with Aegis BMD-capable vessels, namely Japan, the Republic of Korea, Norway, Spain and Australia also use the SPY-1.

The SPY-1 radar employed by Aegis Ashore is virtually identical to that used by Aegis Afloat. Currently, there is only one active Aegis Ashore site, which is located at the Deveselu Military Base in Romania, along with one under construction in Poland. There is an additional land-based test facility in Kauai, Hawaii.

The next effort to modernize the Aegis fleet is called Aegis ACB 20, which calls for a new version of the DDG-51 destroyer equipped with a new radar, called the AN/SPY-6, which is more capable for BMD and Anti-Air Warfare (AAW) than the SPY-1. These new DDG-51 destroyers are currently scheduled to enter service in 2023.

2015: Aegis Ashore equipped with one land-based SPY-1 radar was deployed in Romania as mandated by Phase III of the EPAA. Four U.S. Aegis destroyers deployed to Spain—as directed by the EPAA—equipped with SPY-1D radar.

2005: The SPY-1D(V) variant is deployed for the first time aboard the USS Pinckney, a Arleigh Burke class destroyer.

1991: The SPY-1D variant was first deployed aboard the USS Arleigh Burke (DDG-51), the first of the Arleigh Burke class Aegis destroyers.

1981: The first Aegis cruiser, the USS Ticonderoga (CG-47), which was equipped with SPY-1 radar, was commissioned.